In the run-up to NMN I put an actinic trap out last night and left the porch light on.  The latter attracted 10 Brimstone Moths and 4 Garden Carpets, otherwise the total catch contained singles or doubles of 14 other species including Feathered Gothic, Canary-shouldered Thorn, Centre-barred Sallow and Purple Bar.  One oddity, however, concerns a Footman, which was resting on the ground near the trap and narrowly avoided being stepped on: 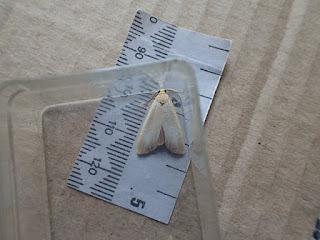 The occurrence of this moth is odd because (a) it's late in the year for any of the Footmen, and (b) it's a very small specimen, forewing length 13-14mm.  Unless it's an import, it surely must be a Common Footman from its shape, although the hind wings appear to be pale grey.  Can anyone come up with an alternative?
Posted by Chris Handoll