Production reduced at the `Pendine Gold Mine`

Last night (2/9), Chris Manley and I spent a few hours trapping on the cliffs west of Pendine, leaving the site to return home just after midnight. I`ve previously trapped three times (once with Chris) at Morfa Bychan, the little bay that separates Ragwen Point and Gilman Point, and on each occasion reaped a rich moth harvest, prompting Jon Baker to remark, after my very first foray there in summer 2009, that I`d `struck gold` (hence the title of this blog).
Unfortunately, last night`s harvest was rather disappointing, especially as we both agreed that the trapping conditions seemed to be good, with cloudy, quite warm conditions and only the slightest hint of a breeze in the sheltered bay. We had hoped for some classic maritime cliff moths - such as black-banded and square-spot dart (I thought that the latter could have been a `cert`!) but, somehow, conditions were not right, and the moths were certainly `thin on the ground`. 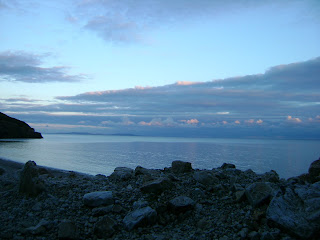 Above: looking across to the whale-backed Gower peninsula in the distance, with Worm`s Head at its tip. 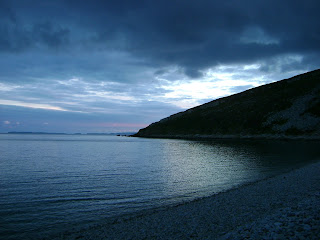 Above: another `atmospheric shot` - Ragwen Point, where Chris set his traps.

Arriving at the site, Chris - as my guest, as it were - was offered as a trapping area, the flanks of Ragwen Point below and seaward of the water pumping station, and he extended one of his MV`s on along a long lead outwards so as to be visible from the headland where the thrift grows (the black-banded`s larval food-plant). His two MV`s and another strong `black-bulb` trap shone strongly, contrasting with my row of blue-lit mobile actinics (`like fairy lights`, as he remarked!) on the opposite headland of Gilman Point.
The only mostly maritime moth caught was the hoary footman, which occurred in most of our traps; it`s a moth that I`ve previously caught here. Unfortunately, we did n`t catch any of our other target seaside moths. One of my little actinics did achieve `trumps` however, in the form of a ni moth (my first), among quite a few silver y`s, and another slight surprise in one of my actinics was a neglected rustic, an autumn-flying moth of damp, acidic areas, perhaps coming from such areas on the side of the bay where Chris had his traps!

Above: a really nice ni moth! - and below, a silver y for comparison.

Above: perched on a Pendine pebble, a hoary footman.

I caught about 26 species (21 macros and 5 micros) and I recall Chris saying that he also had a total `in the mid-twenties`, though some of his species were different to mine, so the final count will be higher. Postscript - I`ve just received a list from Chris, and there`s 11 additional species to mine, so the final tally is 37 species.
Before leaving home for Pendine, I set up a mains-fed actinic in my garden and, checking it early this morning was, in a way, pleased that it hardly had any moths in it - a few silver y`s, large yellow underwings etc.  So perhaps, for whatever reason, last night was just a `dud night` for moth trapping and the short-term forecast does n`t look too grand either.
I`ll be back to Pendine though.....I`m sure that the target moths are there - just hiding! Persistence always pays!

Above: one of the commoner species caught last night - a flame carpet.
Posted by Ian Morgan