Fewer moths (only 40) and fewer species (only 20) than Thursday, but I added another three species to the list: a Drinker that bludgeoned its way into the trap at some point during the night as well as a small group of Chevrons - four counted while others absconded as I opened the trap.

So what odd thing is the old fool on about this time, then? Well, it's like this - in the trap I found the moth illustrated below and I have persuaded myself that it most closely resembles Striped Twin-spot Carpet. As always, the photo shows rather less detail than a decent hand lens and the actual insect. The twin spots on the outer edge of the forewing are absent, but then they often are if you check out photos on the internet. Dots in the central cross band are present, but barely visible in my picture. The slight inward curve of the leading edge of the forewing and the shape of the various cross lines seem an exact match with Rob Petley-Jones photo on UK Moths (please do compare and comment; this would be much appreciated). There is appropriate habitat nearby and according to Paul Waring, "In some places at low altitude there is a second generation August - early September." 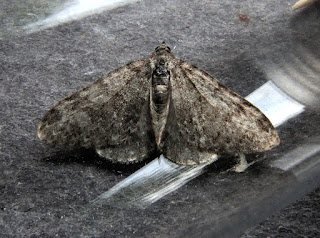 Looking through my own records I found that on 14th June 2015, while messing about on the mountain, I trapped the moth shown below and named it as Grey Mountain Carpet - I now believe that the two photos shown today are of the same species and that the species is more likely to be Striped Twin-spot Carpet, rather than Grey Mountain Carpet - if you can, please set the old fool's mind to rest! 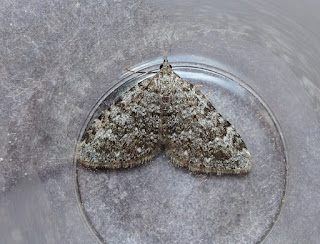 Edit 14 Sept 2015: Mystery solved! Acting on the very wise and helpful comments by Ian and Chris, I think that a firm ID can now be offered for the moth captured on Saturday. Ian's sharp eyes detected possible pectinate antennae in the top photo, while Chris suggested that there is a considerable difference in size between the two species under question. The new shot below clearly shows that Ian was spot on and I can confirm that this moth is an exact match for size for Striped Twin-spot Carpet and not Grey Mountain Carpet. 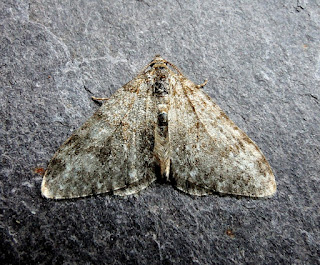 I am also of the opinion that the moth from the mountain caught in June is also of the same species and have amended my records accordingly. So now I have a new target species for next year: Grey Mountain Carpet and I can look forward to more sessions of wearily trudging up and down the mountain - I'm getting much too old for this lark!

Grateful thanks are very much due to Ian and Chris for their invaluable input into solving this conundrum.
Posted by Steve Clarke