During the past two weeks I've had a trap and/or porch light shining on several occasions, in far from ideal conditions, with mixed results - a reasonable turn-up on the night of August 24 but otherwise modest returns.  Large Yellow Underwings and Common Rustics are on the wane here, shortly to be replaced no doubt by Sallows and suchlike - the first Sallow (Centre-barred) turned up to the porch light on Wednesday night: 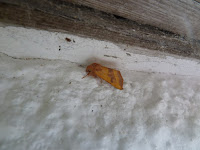 Otherwise, the highlight has been a Bordered Beauty, the first here since 2010: 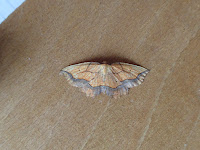 The woodshed continues to produce the occasional Borkhausenia fuscens, two of them on one day, and another Brown-dotted Clothes Moth: 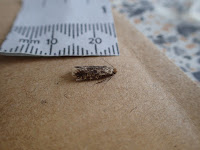 Another find worthy of mention occurred when I was checking back on my notes and photos, and discovered that on the night of 12 August an unfamiliar Tortricid had appeared in the trap.  I believe it to be Epagoge grotiana (strange name!): 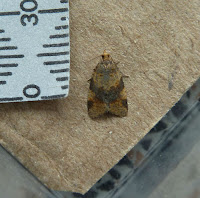 Weather permitting or not I shall endeavour to have one or more traps out on one or more nights between 10 and 12 September.  It's only a week away, so the weather had better buck up!
Posted by Chris Handoll