Thursday night produced a reasonable catch from an MV/actinic combination, current tally 104 moths of 31 species.  Brimstone was the most abundant by far, 24 of them.  Notable were Pinion-streaked Snout and a Caryocolum sp., looks to be the same as the one I had on August 20 (currently with Dave Slade for gen. det.), although yesterday's is not as well marked. 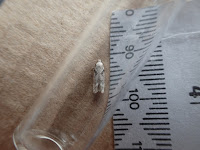 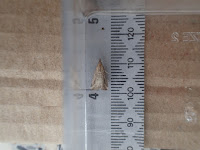 I'm still puzzling over one noctuid, perhaps someone would be kind enough to help me.  I'm probably being blind to the obvious, but its narrow shape doesn't suggest a Square-spot Rustic, more Chestnut-like, and the intricate pattern of black scales is confusing, it's the one on the left in the photo: 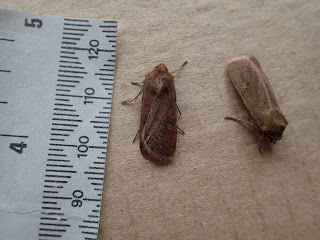 Last night was far too wet to put a trap out, there's nowhere here sufficiently sheltered from such heavy rain, but I left the porch light on and this morning 5 Brimstones, 2 Flounced Rustics, 1 Angle Shades, 1 Pink-barred Sallow and a 20 Plume Moth had braved the conditions.  It's fine just now, if it remains so I will use an actinic trap tonight.
Posted by Chris Handoll