A Steady Trickle of Moths

I have been keeping a watching brief this week with the porch light, and on two occasions an actinic trap.  Although conditions haven't been particularly favourable, damp and/or cold, moths have been turning up in small numbers, mostly the usual suspects, the first Black Rustic of the year, plenty of Brimstones but still no Merveille du Jours or Green-brindled Crescents, two species which always give great pleasure to see.  Two notable records for me though: 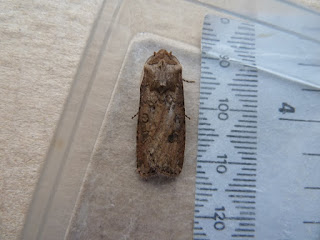 The fact that I've not had this moth before is surprising, perhaps, although I wouldn't want to see it too often, that might mean that the larvae are tucking into my root vegetables.

Secondly, this moth turned up beneath my porch light last night: 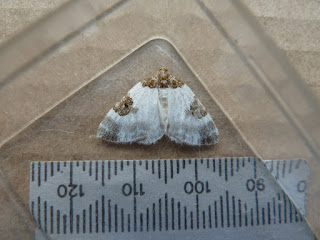 At first, in the poor early-morning light, I took it to be a Garden Carpet, but there seemed to be something different about it so I boxed it up for closer inspection.  Fortunately, as it turns out, because I think that it's a Blue-bordered Carpet, which is a new one for me.
Posted by Chris Handoll