We're back in Brechfa for the weekend so I put out the MV in the hope of a few moths.  It was far too cool overnight and there were only 2 moths in the trap, but searching around produced several more and the final tally was 11 moths of 9 species.  I know I keep saying it, but it's really important not to assume all the moths attracted to your trap will be inside it: search the surrounding area, and try to site the trap somewhere which allows for easy searching of the periphery.  There was nothing of great note: 2 Silver Y, 1 Udea ferrugalis, 2 Pink-barred Sallow and 1 Black Rustic being pick of the bunch. 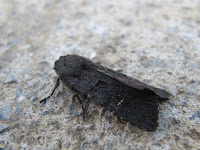 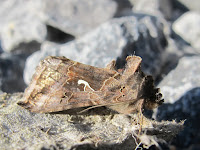 Last weekend at Dingestow (VC35) was more productive, with >20 spp to MV including Beaded Chestnut, Dark Swordgrass, Dusky & Canary-shouldered Thorns, Brindled Green and Turnip.  A Red Underwing was resting on the wall above the trap, and I bumped into two more examples of that species elsewhere during subsequent days.  This spectacular moth is on the edge of its range in SE Carms, whereas it is quite well established in Monmouthshire. 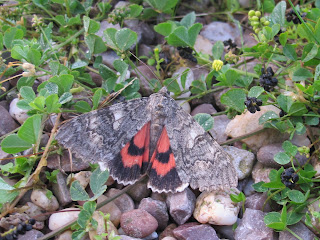