Rob Hunt has kindly forwarded to me a superb photograph of a white-letter hairstreak, taken last week, by Wayne Davies at the Wildfowl and Wetlands Trust Centre at Penclacwydd, Llanelli. This general area, E and SE of Llanelli, has much now-thriving `English-type elm` (either Ulmus minor or procera), in hedgerows that were originally planted in the early 19th Century on this coastal, `levels` landscape. There is another rather recent record from nearby Bynea (where, again, there is much elm) and I had one in my garden at Pwll, on the other side of Llanelli, just a few years back (again elm is locally frequent), and there are also other records from around Furnace, Llanelli. Additionally, there are also recent (ie in the last decade or so) records from the Tywi Valley area, especially near Cilsan. 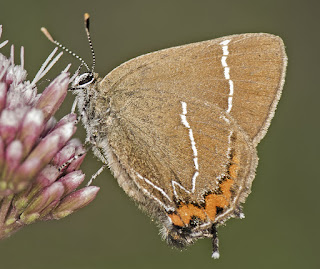