V Moth No.2 , Amongst Others

Although rain was forecast I risked the new Skinner actinic trap last night, sheltered under the eaves at the back.  It got wet, but that didn't deter the moths, and when I closed it down at 5.30 this morning it was buzzing, literally.  I have never had a trap so full of moths before.  Unsurprisingly, Large Yellow Underwing was the most abundant species, over 100 of them, I'll never know exactly how many (does it matter?!) because many of them escaped into the utility room as soon as I opened the trap.  No doubt many will reappear over the next day or two.  Common Rustic agg. was the next most abundant species, followed by Dingy Footman.

A V-Moth was amongst the catch.  I did wonder whether it might have been a reappearance of the first one, but the photos show that they are different moths.  The appearance of two of them this year may suggest that I have a breeding population here, but perhaps I'm being too fanciful. 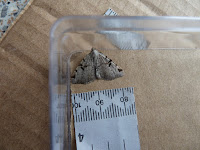 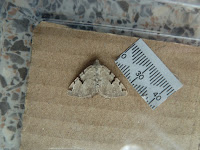 I would be grateful for advice on the identity of the moth below.  It looks like a Wainscot to me, and the closest I can get is Bulrush Wainscot, which I haven't seen before. 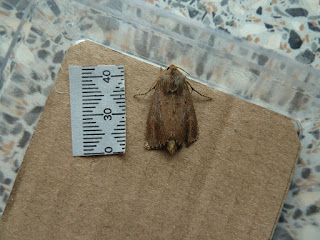 Thank you in advance!  No doubt more help will be required with a few micros which I'll be photographing in due course.
Posted by Chris Handoll