Brief stops on the way to my in-laws in Gwernogle produced mines of Stigmella lapponica (photo; contrast the linear frass with Ian's photo from a couple of days ago), S. continuella and Ectoedemia minimella on Birch, and Bohemannia pulverosella (photo) on Apple. 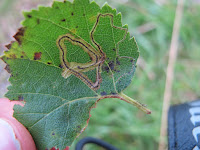 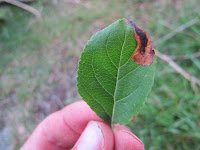 Far more exciting was my first ever Four-banded Longhorn Beetle (Leptura quadrifasciata; Notable b), which Bea's cousin Rufus spotted in the garden and brought to me with a calm "I've found another Longhorn Beetle".  This is the second Longhorn we've seen in two days, both of which were new species for me (despite nearly 10 years of off & on recording of Cerambycidae), the other being the even rarer Red Longhorn Beetle (Stictoleptura rubra) which we found at NBGW on Friday. 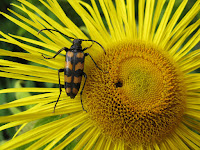 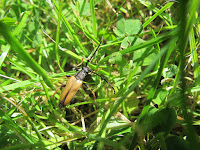