I too trapped over the weekend, hoping for that rare migrant that did n`t come! The only migrants recorded, on a rather rain-soaked Sunday night (2/8), were some silver y`s and a solitary rush veneer. There was, however, a good mix of resident moths such as FFY black arches, double kidney, backed up with multiples of yellow-tails, marbled greens, small wainscots, southern wainscots, scarce footman (only one of this species), silky wainscot and 4-spotted footman (x2). I also caught a fresh-looking Caloptilia rufipennella and the tiny Aproaerema anthyllidia (the latter det. by Sam). 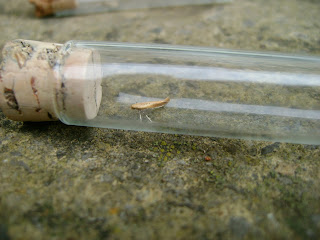 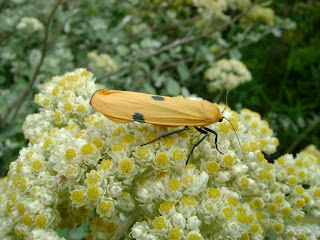 Above and below: four-spotted footman female (above) and male (below). 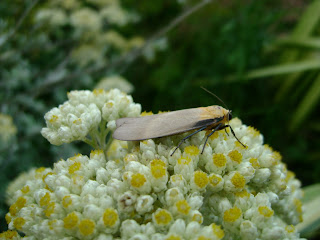 Above: when is a brown-tail NOT a brown-tail? I`ve had this issue before - a yellow-tail with a brownish tail, but the wing shape is that of a yellow-tail. I recall Jon Baker and I being slightly confused with the same problem almost a decade ago. It`s a yellow-tail in my opinion.

Above: I suggest a provisional i/d of Pammene populana for this tort?
Posted by Ian Morgan