Pembrey Old Harbour and the eastwards accretion of Cefn Sidan.

I`m posting this, as it may be of interest to Sam (re his preceding posting). I include below a photo of Pembrey Old Harbour (as opposed to Burry Port harbour, the one with the yachts etc) which is just to the east). Gower is in the far distance. Pembrey Old Harbour is now completely infilled by sediment and saltmarsh vegetation, while BP harbour fights an ongoing (and probably ultimately useless) battle with the enormous amounts of sedimentation caused by the eastwards extension of Cefn Sidan and Pembrey Burrows. 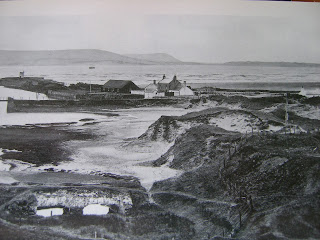 The above shows the old stone breakwater at Pembrey Old Harbour in c 1910 or so. Note that there are NO dunes to the west (ie the right in photo), beyond the now-demolished houses. If you were to stand on that breakwater today, the southern, eastwards-growing arm of Pembrey Burrows would only be a very short distance away and the expanse of Pembrey Saltings (as it is locally termed) will be to your immediate west.
I term this newer southern arm of Pembrey Burrows `Pembrey Burrows South`, and call the older dune ridge that is westwards of the base of the old breakwater (and which the Sustrans cycle and Wales Coast Path follows) `Pembrey Burrows North`, to differentiate them.
Pembrey Burrows is one of the few rapidly accreting dune systems in Wales and I recall, in summer 1976, that the southern arm was still quite far to the west, making it difficult for me taking a then risky and stupid short cut across the substantially much wider gap before the tide came in!
That little cottage, in the very far right of the photo, is long gone, but garden plants such as Michaelmas daisies and lily-of-the-valley still grow on site, near a privet clump where the cycle track enters the dune section.
Posted by Ian Morgan