Your Hummer wasn't the only visitor to Morganland today, Ian.  Bea, Johnny and I took the train to Burry Port to build sandcastles on the beach there, and fantastic it was too!!

As we walked past Burry Port Harbour I noticed a line of Red Valerian growing out of the harbour wall, with a Hummingbird Hawk in attendance.  We also spent a good deal of time jumping in the dunes, which gave me ample time to admire several Small Blue (in two 1km squares, at SN439002 and SN441002) and to photograph another Hummer (SN439002, so I guess these are best referred to as Pembrey Harbour Dunes, or perhaps "Burry Port Dunes west").

A wander across the saltmarsh at Pembrey Harbour itself (SN437001) disturbed 3 Scrobipalpa instabilella from Sea Purslane (a new site, previously recorded from Pembrey Burrows & Forest, Pendine, Laugharne and Kidwelly) and 3 Eucosma tripoliana resting on Sea Aster (2nd Carms record, following 10 I saw at Pembrey MOD in August 2004).  The breakwater held a Grayling and an Aproaerema anthylidella. 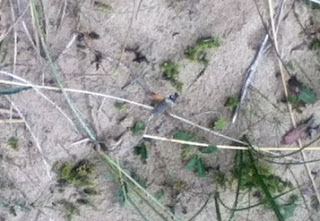 A terrible iPod photo; again I can't work out why it isn't rotatable to be the right way up!

Final surprise of the day came in the form of this gall on Cat's-ear, which I hoped might be lepidopteran.  The book suggests it's Phanacis hypochaeridis, an uncommon Cynpid Hymeopteran. 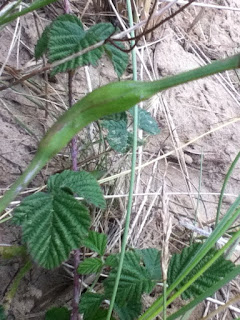