On 27 May I posted an account of finding a small brown moth fluttering around our living quarters, and the concensus of views was that it was Tinea (clothes moth) group.  Since then I have apprehended more of these moths - in fact they are cropping up on a daily basis, most days I'm seeing at least two of them.  Here are images of a couple of recent ones: 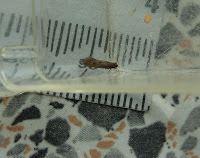 It's a bit worrying that, according to the description in S&P, infestations can occur of the most likely candidate, Tinea pellionella.  I shall certainly be trying to locate the source of them, it could well be a tapestry that we brought back from Lesotho 24 years ago, which is hanging in the bedroom where most of the moths occur.  A search for the larval cases is definitely called for!
All of this raises the question of how I should record these moths.  As things stand, the record sheet requires the species to be identified, and (as I understand it) that's not possible without microscopic examination.  Yet it seems a shame that these observations aren't put on record.  Is there not a need for a category 'Tinea pellionella group'?  The same probably applies to other closely-related micromoth species which cannot be separated without dissection.

Another, even smaller, brown moth turned up in my woodshed on two occasions last week (I always seem to get these drab micros when others get the pretty, brightly-coloured ones!) 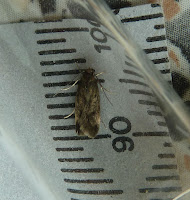 I put the MV trap in a supposedly sheltered spot last night because conditions were fairly benign in the evening.   The wind and rain picked up overnight, but the trap was not harmed and there were plenty of moths about.  25 spp. were recorded, nothing particularly unusual, although I did get a FFY Common Footman, a species which is anything but common here.  A new record for me was the Willow Tortrix Epinotia cruciana: 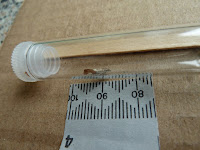 One query relates to the Crambid below, the longitudinal streak on the forewing does not seem to conform to any of the species illustrated, but it must be one of them!  Suggestions would be welcome.

UPDATE
The Lesotho tapestry is the source of the clothes moths, at least it's one of them, there may be others but I hope not!  I removed 10 larval cases from it, and a moth flew off when I removed the tapestry from the wall (not yet apprehended).  At least two of the cases have live larvae in them. 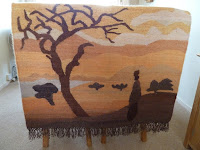 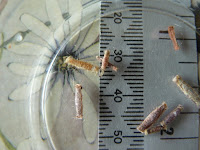