Yesterday afternoon (12/8), I visited some brownfield areas near Machynys and Morfa roundabouts, both to the SE of Llanelli.
It always pays to read moth blogs of neighbouring counties, and George Tordoff in a recent posting on the Glamorgan blog site remarked on the ease by which Apodia bifractella could be obtained by simply searching flowers of fleabane. I`d recently had this species near Burry Port, so I put George`s useful advice to the test and, indeed, I found it straight away at Machynys. Photo below.

Sweeping of the rich ruderal mix of flowers, as well as longer-established perennials, yielded several of the tortricid species shown below - is it Aethes smeathmanniana, a species that feeds on yarrow and knapweeds? (Postscript: believed to be this - Jon Baker).

Sweeping (particularly in the afternoon rather than morning) can be really productive for micro-moths, but some larger moths can also be obtained, as was the six-belted clearwing pictured below. I`d been wondering why I had n`t caught any of this species so far this year, particularly as I`ve been sweeping for micros a lot on brownfield sites with plenty of bird`s-foot trefoil and other small legumes. In the past, I`ve had it at sites such as Ffos-las (before it succumbed to trees, whether unfortunately planted or self-sown) and also at a little limestone quarry SW of Carmel; my first record of this species was actually on the Penrhyngwyn shingle beach, at the very seaward tip of Machynys and not far from yesterday`s capture, back in August 1985.

Several micro-moth species were caught and are in the process of being looked at. Is the first moth below Hedya nubiferana or a related species, and what is the following rather gingery one please? 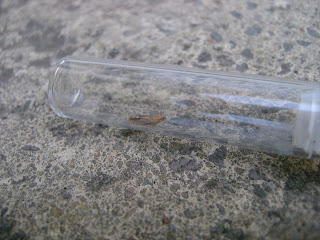 During the course of my wanderings, many butterflies were in evidence, mostly dominated by gatekeepers, but one dingy skipper was seen. Several silver y`s were also flushed, but the individual shown in the following photo was spotted as I stalked another moth. I thought that it looked rather well camouflaged against the dead stem on which it is resting.

Later, small blues were noted (with other butterflies) at the North Dock dunes and a male brimstone appeared in my Pwll garden. I will write about last night`s moth catch tomorrow - it was a night when it was easier to weigh your large yellow and lesser broad-bordered underwings rather than to estimate numbers! Some nice moths were caught too (but not in the migrant camp).
Posted by Ian Morgan