In a way, I`m glad that Sam experienced a dearth of micro-moths yesterday, as did I near Rhandirmwyn, in the far NE of the county. It was exactly the same for me too the day before (Monday 17/8), when a visit was made to two potentially-interesting sites: Mynydd Llangyndeyrn on the north-western ridge overlooking the Gwendraeth Fawr valley near Pontyberem, and an old former colliery site at Cynheidre, on the opposite ridge to the approximate south. Both the heathland and bog habitats at the former site and the diverse brownfield/woodland edge vegetation at the latter ought to have yielded a variety of moths - but they did n`t and the thought did cross my mind that were Sam at these sites then he would have obtained some good records. So, I`m glad it was perhaps the weather/seasonal conditions rather than me, as I was sweeping for ages, particularly at Cynheidre, where I was rewarded by only a single Pyrausta despicata, a few crambids and one or two others..
Nevertheless, it was nice to visit both sites and to see the admixture of western gorse, bell heather and ling on the arid quartzite dip slopes at Mynydd Llangyndeyrn at its colourful best. Sweeping of the heathers at this site was made rather fruitless (in moth terms) by the sheer abundance of what looked like a bibionid fly, perhaps Dilophus febrilis, which were in numbers on every inflorescence. 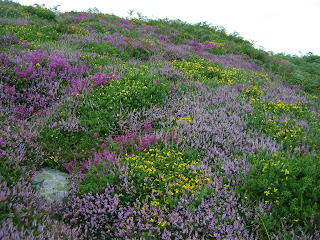 Above: plenty of colour but no moths - the dry heath mix mentioned above.
Posted by Ian Morgan