I spent a few hours checking monitoring the hydrology of four of the Carmel bogs today with Jamie Bevan.  There were a lot of Micros around, but with work to be done I didn't do as much mothing as I wish I could have.  Eupoecila angustana were particularly abundant, and there were also some Catoptria margaritella and Aphelia viburnana.

Two Elachistids provided the highlights: one was a nice, obvious Biselachista albidella - characteristically pale with a black dash on the wing and associated with Eriophorum - the 4th Carms site for this uncommon bog moth. 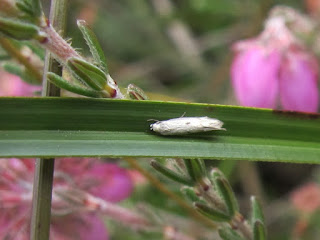 The other also looks very distinctive, with white marks near the wing-tip associated with a darker mark and with a dark ciliary line, but the only thing it fits is Biselachista serricornis, which would be new for Carms.  Continental literature suggests it feeds on Eriophorum, although MBGBI only gives Carex sylvatica.  The UKmoths image is from Chartley Moss - a schwingmoor bog with similar floristics to the Carmel Bogs - and interestingly UKmoths also shows B. albidella from Chartley Moss.  I'm 99% sure my ID is correct, but frustratingly I released it after photographing because I assumed such a distinctively marked Elachistid would be easy.  I saw 3 of them within 10 minutes flying actively in mid morning sunshine on the easternmost (Cors Carmel) bog and a revisit soon would be worthwhile. 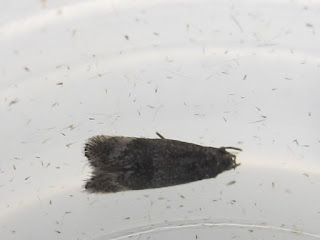 Another interesting surprise was a Tortoise Shieldbug on the westernmost bog. 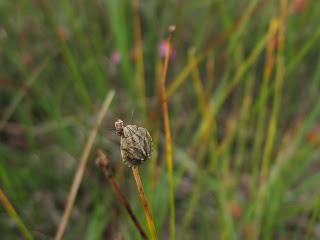