Following on from Sam`s longhorn blog, perhaps readers may also be interested in the following:

Imagine a huge longhorn beetle, Cerambyx cerdo, long extinct in Britain and only known from virtually semi-fossils in East Anglian bog-oaks, turning up in Llanelli - of all places! This is what happened at the end of June 2006. I had been contacted by  a local voluntary group, who ran a furniture repair workshop for the unemployed at Trostre, Llanelli, with a message that they had found `a huge beetle` in a supply of oak, obtained from a supplier in Carmarthen. Another one was found a week or so later, and in complete contrast, I found the diminutive longhorn Pogonochoerus hispidulus at the same time at Gelli Aur - what a difference!
It is possible that the oak was originally imported from Hungary - which raises questions about the destruction of old woodland in that country. I seem to recall that there were other sightings associated with imported timber elsewhere in Britain that year (in Hampshire?) and that it was a different sub-species to that once found in Britain (but I`m not sure about the last point).
Anyway, a couple of photos taken at the time, one of the creature gracing my hand, and the other of it positioned next to a 2p. coin: 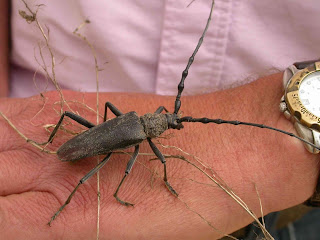 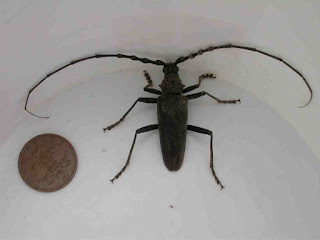