A return to the hills...

Today, Jamie Bevan and I re-visited Allt Rhyd y Groes NNR, which is located north of Rhandirmwyn and adjacent to the border with Ceredigion (demarcated by the Afon Pysgotwr). It was an interesting walk in a fantastic area for both scenery and wildlife but, today, the moths were not particularly forthcoming - basically various crambid grass moths and a very few other species. We were also plagued by hordes of `sweat flies` Hydrotaea irritans swarming around our heads, so we `beat an early retreat` to the shaded woods and the parked vehicle and decided to visit the old lead mine at Nant-y-mwyn, closer to Rhandirmwyn. 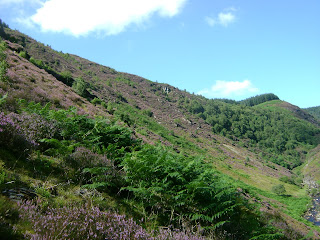 Above: to remind readers of the fantastic landscape and wildlife habitat in Cwm Pysgotwr, with the river to the far right being the boundary with Ceredigion.

Once again (at the old lead mine area), crambid moths dominated the catch and I was - in the virtual absence of other moths - able to focus on this group, recording five species, including the relatively frequent upland species Catopria margaritella and also the mostly coastal Agriphila geniculea, the latter updating some older Rothamsted trap records from nearby.

Above: Agriphila geniculea, caught on the dry spoil at the old lead mine site.

Above: another mediocre `record shot`, this time of Catopria margaritella.

Above: for those who are interested - a view of the lead mine ruins.

We also saw a total of five silver-washed fritillaries - about three near Rhyd y Groes cottage SN770474 and another two, one of which was at the NW edge of the woodland, at SN759483.
A grayling was seen at the lead mine site, at SN781447.
Posted by Ian Morgan