A Lean Week at Maenol

I managed to put a small actinic trap out on Monday night which, along with the porch light, attracted about 50 moths of 20 spp, the only notable one being this large Pug: 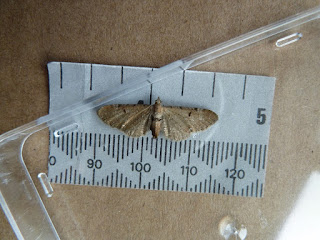 It seems a bit large for a Currant Pug, which I had earlier this summer.  The alternative seems to be Wormwood, albeit rather a late one.

The window in my woodshed continues to attract small moths, two more Borkhausenia fuscens turned up this week, along with a slightly larger brown/black speckled species, which I suspect is  a Tineid and probably not identifiable, but here's a couple of photos in case anyone recognises it: 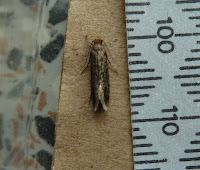 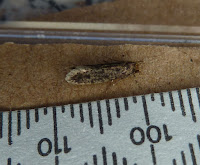 This week has been something of an anticlimax after 24 hours on Skomer last Friday/Saturday with members of the Pembrokeshire Moth Group.  Seven traps set in fairly ideal conditions on Friday night, following a stroll around the potential trapping sites in the afternoon, produced a count of over 1200 moths of 107 spp.  No unusual migrants unfortunately, but numerous species which were new to me including Square-spot Dart, of which 239 were recorded.
Posted by Chris Handoll