A good night at Burry Port

On Friday evening (14/8), I left out two actinics on disturbed, weed-rich areas just east of Burry Port, alongside the southern by-pass; I had meant to put out a third trap, but ran out of time. Both trap sites were very close to the road and probably visible from high vehicles or if anyone was walking home and peered over the edge of the crash barrier. However, they were both some distance into rough vegetation and were undisturbed by humans (though I wonder sometimes what the police helicopter makes of these strange lights as it regularly flies overhead!). 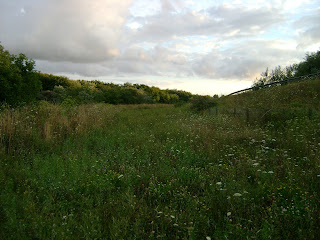 Above: the trap site, with the by-pass to the right and a path of the Millennium Coastal Park to the left (the trap is hidden in the vegetation from the latter). Note the floral diversity.

In one trap, I only had about twenty species, though I did capture Ypsolopha scabrella again (photo below):

The other trap (the one located at the site shown above) had a much richer haul, with almost 50 species, some of which are shown in the following photos. I also took Aproaerema anthylidella (and have a very poor `record photo` - not shown).

Above: I think that this is the uncommon red-banded form of dark-barred red twin-spot carpet, with the more markedly toothed outer edge of the band, but please correct me if this is the wrong assumption. 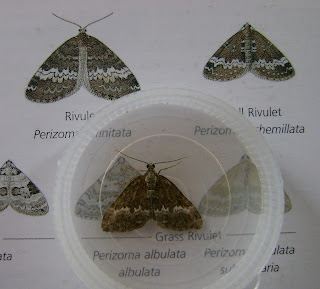 Above: I believe that it`s a small rivulet, as it matches the size of that species, but it`s a bit late in the season - am I correct? [see comments section below - thought to be rivulet. I`ve also added the additional photo below, showing how small it is to average-sized rivulets].

Above: an attractive July highflyer.

The micro-moths were good at this locality too and a selection follows:

Above: This this large scoparid resembled Scoparia basistrigalis but I am advised by Jon Baker that it is -sadly - a very fresh and well-marked S. subfusca which now certainly seems so, if checked carefully.

Above: believed to be Blastobasis lacticolella (plenty of B. adustella were also caught).

Above: Batia lambdella. It`s significantly larger size distinguishes it from the quite smaller Batia lunaris (which I caught in my nearby garden trap on 16/7).

Above: a faded Anania crocealis, a pyralid that is frequent in damp areas along the coast.

Above: I think that this is the scarce species Gypsonoma aceriana, a moth associated with poplars (which grow nearby). Another view is shown below. Later confirmed by Jon Baker.