A couple of old specimens...

Yesterday`s capture of a six-belted clearwing started me reminiscing about the `good ol` days`, in the late 1980s/early 1990s, when I was doing a lot of recording of hoverflies and some other groups of diptera.
In that process, I did a lot of searching and sweeping, as well as examining old trees etc and a bonus was that I caught several species of clearwing, including the two shown below. I also used to catch thrift clearwings on Carmarthenshire`s western cliffs and the aforesaid six-belted clearwing in the south-east of the county. I was also given a specimen of a white-barred clearwing, taken from young alders alongside the Afon Bran near Llandovery and it would be good to confirm this species` presence  in the county once again - something for next year, as most clearwings are now `over`. Another that personally eluded me though ( I did look!), was the currant clearwing, which Jon Baker subsequently recorded in allotments at Carmarthen. 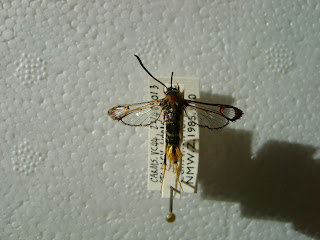 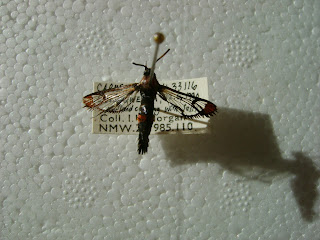