When I first started mothing and couldn't afford an MV trap I used to go torch-netting regularly in the Dingestow area.  Jon Baker did the same when he started out on Otmoor, Oxfordshire.  Both of us caught loads of interesting moths, some of which are seldom found at light traps.  This form of active mothing is also a great way of learning how moths actually behave: something you won't find out from examining morning trap catches.  A 45 minute walk up our lane on Thursday night produced more than 20 species of moth, split roughly equally between Geometrids and Noctuids [which is unusual, because fast-flying Noctuids are much harder to net than fluttery Geometrids, but it was a very blustery night and few Waves/Carpets were flying].

Torch-netting is a bit like chasing butterflies but with the added challenge of everything being 2D rather than 3D, with the torch beam giving one tunnel vision and meaning that there are regular glimpses of moths flashing through the torch beam and away into the gloom.  Individual species have their own flight styles: Yellow Shells sit low on the hedge and flutter out from it, Elephant Hawks hover around Honeysuckle, Angle-shades fly rather upright, and there's something distinctively floppy about Snouts. 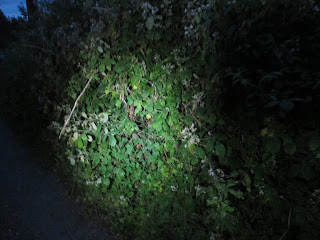 You also spot nectar sources: Sallow, Nicotiana, Buddleja, Clematis, Ivy etc.  On Thursday night it was Rosebay and Meadowsweet that attracted most moths.  At least 7 Large Yellow-underwing were on the Rosebay along with a few other Macros, whilst Dingy Footman was on Meadowsweet. 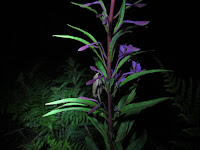 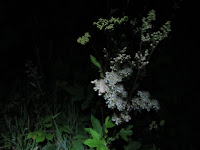 Highlight of the evening looked set to be Northern Spinach, which I had previously assumed wandered into the Cnwc garden from a long way away, but I now think is breeding on small heathy patches just up the lane.  However, just as I approach our garden on the way back I netted a Noctuid feeding on flowering Yarrow, and was amazed to find it was a Double-lobed, new for the Brechfa area! 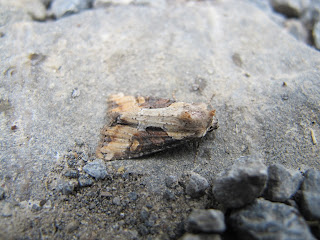