I NVC mapped one of Ian's regular sites - Ty-llwyd Bog near Hendy/Fforest - today (28th July) and was annoyed with myself for leaving my net at home.  The weather was drizzly and cool at first and I disturbed no moths, but things warmed up by 13:00.  I have often noticed that morning micro hunting can be rather slow.

Highlights were two leafmines on Birch: Bucculatrix demaryella has one previous VC44 record made by E.C. Pelham-Clinton in the 1970s, whilst Ectoedemia minimella has no previous records as far as I can find out.  The Bucculatrix makes short angled mines and then eats out a 'window', and the Ectoedemia forms a blotch in which the frass is concentrated in one corner.  Also present were some mines of Lyonetia clerkella on Rowan. 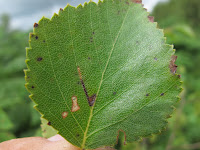 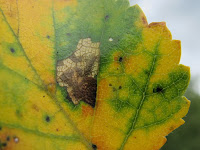 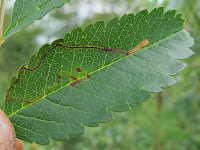 The Birch theme was completed by a Caloptilia betulicola (4 previous VC44 records) that landed on a grass leaf, and several Argyresthia brockeella.  I wish I had been able to use my net :-( 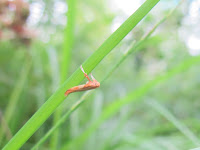 On my way out I noticed a Bilberry Pug fluttering around, as well as 2 Cydia aurana on Hogweed.

All in all a useful couple of hours.
Posted by sambbryo