It`s not often that we get a concentrated spell of good moth trapping nights as this week, so a continual effort has been made since Sunday evening to trap. I had six traps out last night, all around Llanelli (I have n`t done any `long distance traps` for a while).
Apart from the cream-bordered green pea, mentioned in an earlier blog, a few highlights of last night are given below. I`ve still got specimens/photos to determine, so records may be added, but here are a selection: 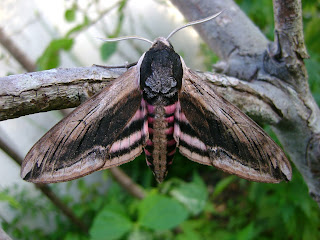 Above: a privet hawk-moth (quite regular at Tyrwaun, Pwll).

Above: the warm conditions encouraged wandering/dispersal of moths. This bordered white (a female, placed on my garden Bhutan pine for the pic) probably came from a pine-clad hillside, just west of Pwll. 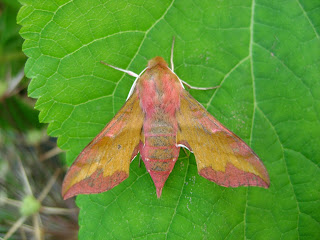 Above: another wanderer to Tyrwaun, this time from the nearby coast - small elephant hawk-moth.

An actinic, set out on the dunes/saltmarsh at North Dock, Llanelli yielded various useful records, including Archer`s darts, sand darts, shore wainscot and 50+ crescent plumes Marasmarcha lunaedactyla, the latter flying around at dawn. I also caught a sandy moth, raising hopes of something `southern and desertish`, before I remembered Anarastia lotella! It is shown below:

Another overnight trap, left some distance away at Machynys, on a brownfield site with much broom etc yielded Anarsia spartiella (below):

A trap, left in a suburban garden on the westernmost edge of Llanelli, had Freyer`s and sloe pugs, as well as the colourful  tortricid Rhyacionia pinicolana (there is a Scot`s pine close by). Both the above pugs and May and July highflyers were also caught at Furnace Quarry. Sloe pug is certainly having a good year; it was first recorded in the county by Barry Stewart only in 2006 at Pwll, and I`ve also had it a couple of times since.
Finally, a trap at Stradey Woods had no huge surprises (though there was good variety) but Argyresthia brockeella was a pretty, if tiny, `nice find`.

Finally, thunder and lightning now outside.....bringing migrants to me?!....I`ll give it another try tonight - then rest!
Posted by Ian Morgan