`Raining moths` - then the rain came!

I had planned to do some`away from home` trapping last night but, after a very early start dealing with the previous night`s moths, and a busy day, I fell asleep and so had to confine myself to garden trapping. The forecast (for Llanelli) was warm, overcast and with southerly winds - and no significant rain.
Lighting the traps (one MV and one actinic) at about 10.00pm, they were immediately attracting lots of moths but, at about 10.45pm, there were droplets of rain and I retired indoors, leaving the traps for the night. Before sleeping, I heard that the rain was quite heavy but both types of trap are safely left in the rain, provided the `electrics` are waterproofed and the MV bulb has a heat-resistant dish over it.
The traps were quite sodden when inspected at about 5.00am this morning but, although there was good variety (53 species of macros), there were no exciting migrants - only some silver y`s and rush veneers.
Among the macros, there was FFY scarce burnished brass, dun-bars and square-spot rustics. I`ve still got the micros in the fridge to deal with - probably tomorrow.
A very poor, fuzzy `record shot` photo of the scarce burnished brass is shown below - I had the camera on the wrong setting and I`ve since released the moth. This species is associated with hemp agrimony, which is frequent nearby - indeed, it grows in my garden. South-west Wales is a stronghold for this moth. 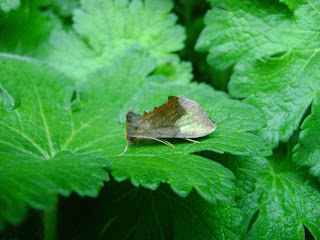