I had planned last night  (1/7) to put the full set of traps out at various localities but, due to utter tiredness and intermittent rain, I only set up the MV at home (Tyrwaun, Pwll) and with two weak actinics at sites east of Burry Port. In fact, it was raining when I set up the traps, but all of them cope well in such conditions, with an upturned pyrex dish (with c 3" sides) placed on top of the MV bulb - such an arrangement has always coped with heavy rain, as it did last night.
The weather conditions - warm and usually quite overcast - were again ideal for moths and there were good numbers and variety, even in my relatively weak actinics. There were no migrants at all, not even any common species. Indeed, the lack of any migrants in my traps during the last four consecutive nights leads me to question whether the cream-bordered green pea that I recently caught was of that status - it is quite a long-shot coincidence for me to catch one two years` running, if it was a migrant?
Other moth highlights include blue-bordered carpet, sand darts, blacknecks and grass rivulets in one of the `E of Burry Port` traps, and silky and obscure wainscots, round-winged muslins, privet and eyed hawk-moths in the other. The `home trap` had (as additions to previous nights) yellowtails, cabbage (as well as dot moths for comparison), bordered sallow, round-winged muslins, dingy shell, privet  and eyed hawk-moths (again), garden and scarlet tigers, and l-album wainscot (the latter has been established for a few years now on the Llanelli-Pwll-Burry Port coastal section. Even though I trapped for four nights at home, there were different moth species for each of the nights (with just a few recognisable recaptures). I did not switch on the traps off for a short period of darkness in order to allow the previous night`s moths to disperse and I (mostly) only recorded the new moths in order to speed up the `processing`. I still have quite a few moths left to process from this week`s efforts.
I include some photos below - apologies for the poor quality of most, due to a technical mishap with the camera! 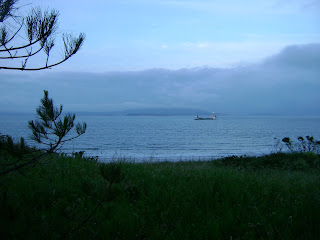 Above: the trap site at c 5.00am - note the sand dredger coming in, with lights on, on high tide, and with Whiteford in the background. I wish that the reddish light arches that Chris Manley caught there a few days ago had come my way! 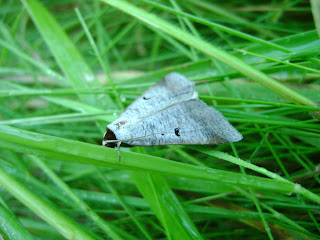 Above: blackneck - five were in one trap. 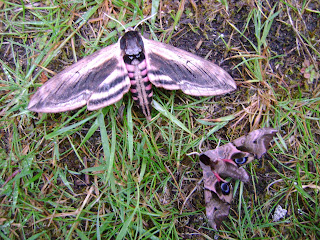 Above: privet and eyed hawk-moth - for size comparison. 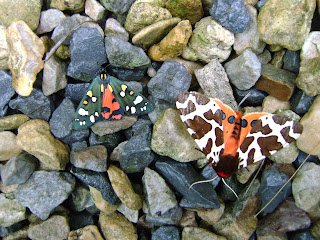 Above: both scarlet and garden tigers were caught in the garden trap.

.....and so was the first of the year`s l-album wainscots.
Posted by Ian Morgan