On Wednesday (22/7), I made one of my quick visits to a convenient local site - a small sandy spit, that has developed over the last two centuries or so and which is based on a man-made breakwater, the latter constructed to shelter one-time dock facilities. This location is extremely easy to visit (with an adjacent car park) and has a nice transition of saltmarsh/sand dune habitat. It is owned by Carmarthenshire County Council, but its educational potential is seemingly hardly utilised (there are schools within walking distance) and sea buckthorn is establishing itself at one very small area. I have drawn the Millennium Coastal Park rangers`attention to the latter on more than one occasion (it can still be easily controlled), but nothing has been done to safeguard this LNR. It`s removal would make an useful biodiversity project for volunteers or perhaps even an older school party; the fact that the site lies within an electoral ward that scores high on multi-deprivation indices could help fund a community project for such work. Perhaps NRW and CCC could arrange such an initiative?
The short visit was made after a period of rainfall had turned into a spell of strong sunshine - but with a very strong blustery wind, which made sweeping difficult and which drove many moths deep into the vegetation. I am sure that if I`d visited in calmer conditions, then more would have found.
Among the moths noted, the pyralid Homeosoma sinuella was seen, as was the crescent plume Marasmarcha lunaedactyla and the tortricid Dichrorampha petiverella (there`s plenty of tansy on the topmost part of the saltmarsh); six-spot burnets were noted feeding on various flowers. I`ve also done some moth trapping at this site (overnight actinic). 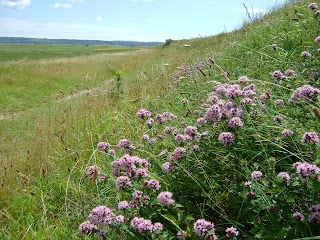 Above: view looking c S. from along the path, with marjoram. Strangely, no Pyraustas were seen - perhaps too blustery?

Above: not a moth!...but the sulphur beetle Ctenopius sulphureus, which is abundant on Carmarthenshire sand dune sites. 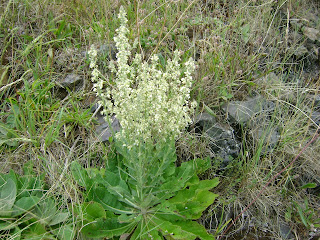 Above: a county rarity for the plant enthusiast - white mullein Verbascum lychnitis, which grows on a sandy/slaggy bank on the E. side of the main path. 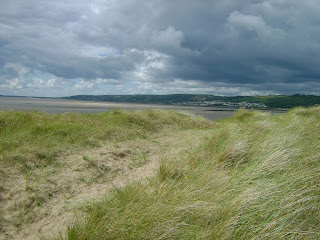 Above: finally, looking NNW and showing the general position of the sand spit, with the flattened semi-circular settlement in the distance being Pwll, on the western outskirts of Llanelli. My house would be on the very western margin (left in the pic) of Pwll, on the edge of the sea but obscured by trees.
Posted by Ian Morgan