....but I thought that I should post this photo of a presumed migrant, caught at Tyrwaun, Pwll (30/6). I would have preferred that it was n`t a migrant and it was a locally-wandering resident (there`s a huge amount of mixed Salix plantings in the adjacent Millennium Coastal Park) but one was also caught in Cornwall last night. It is, of course, a cream-bordered green pea.
Had six traps out last night, plenty of moths and good variety, with some very useful records being made, but no other migrants - not even any common species....I`m still waiting but will try again tonight.
Will hopefully post the rest of last night`s captures, with pics, later today. 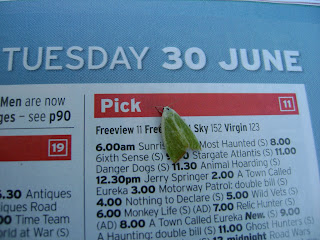 The trapping conditions are looking good tonight, so certainly again worth trying. It`ll be my last night of this series of four consecutive trapping nights, as - thankfully! - it looks clear and cooler on Thursday night.
Posted by Ian Morgan