Knowing that I would n`t be trapping last night (Sat 25/7) due to heavy rain, I quickly popped over to another nearby brownfield site in the afternoon. This brownfield site is located to the SSE of Burry Port and just north of the southern link road from Llanelli, at SN449004 etc.
Many brownfield sites are great for wildlife, including lepidoptera. For example, this particular area had marbled whites and small blues, as well as many moths and other invertebrates - all favoured by the diverse range of flowering plants, areas of dry, sunny bare patches on open ground and sheltering scrub and brambles etc. We undervalue such areas, which are far richer in wildlife than much of the farmed countryside. 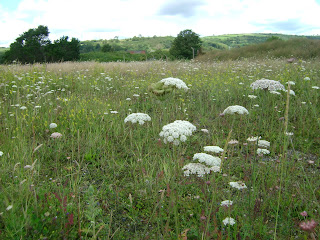 Above: lots of wild carrot, yarrow, bladder campion, rest-harrow, toadflax and various legumes in this section. 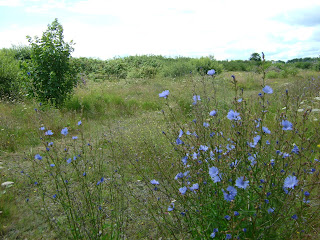 Above: another part with chichory, with scrub in background. 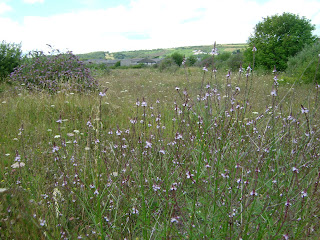 Above: looking c NW towards Burry Port town centre, vervain in the foreground and much dry, flower-rich vegetation (and lots of six-spot burnets).

Above: early on, I netted this dapper `light grey-with spots` tort, which matches the typical form of Cnephasia asseclana, but gen.det. is needed for a firm determination. However,the moth escaped as I took it out of the tube to photograph!

Above: the underside of the unfortunate Pyrausta ostrinalis above - at least seven were seen, so it won`t harm the population! Note the two bands under the hind-wing.

Above: lastly - I mentioned earlier that these brownfield sites were good for invertebrates, and quite a few records were made of hemipterans, some diptera etc. The above is a young long-winged conehead Conocephalus discolor (a type of bush-cricket), which is a new species for Carmarthenshire. It has n`t developed the long wings yet, but the straight ovipositor at its rear identifies it as that species. I originally thought that it was just a short-winged conehead, which is frequent in brackish marshes etc along the Carmarthenshire coast, but Dave Slade pointed out the true identity. The lack of wings suggests that it is of stock already established in the vicinity, rather than a brand-new arrival. Thanks to Dave Slade for realising that this was C. discolor.
Posted by Ian Morgan