On Thursday evening (9/7), I decided to do some trapping in local woodland, as well as `home trapping`, with the primary intention of targeting an area of bilberry in Stradey Woods on the NW outskirts of Llanelli - a locality where bilberry pug has been recorded in the past. The particular area comprises the only significant area (of about the size of a tennis court) of bilberry in the wood, it occupying a high Pennant Sandstone bluff overlooking the steep `cwm` of Cwm Mawr, alongside the B4308 to Trimsaran.
At one time this area of bilberry was of relatively easy access, by way of a rough track but the prolonged, wet summer in 2012 resulted in slumping on the steep slopes, with many trees falling, thus blocking the path particularly as subsequent bramble growth has covered those trees in large entanglements. Consequently, after a ten-minute walk up the cwm (no easy task carrying the assembled actinic and the battery), I thought I`d try a different way to get to the bilberry area via an alternative route and I ascended the steep slope obliquely, with no free hands (holding the traps) to stabilize myself, on the rather slippery slope.
I had presumed that I would reach the bilberry area quite quickly, but I was instead encountering thick brambles and much broad buckler ferns and, looking backwards, I did n`t fancy descending the slope that I had just climbed! So, onwards I went - and worse and worse it became, with the brambles thickening and the buckler ferns sporulating madly over me! By now, I was cursing and perspiring, with hordes of `sweat flies` and attendant miscellaneous biting diptera. To traverse the brambles, I had to walk like John Cleese in his `Ministry of Funny Walks` sketch, all the time holding the moth gear in both hands, above a steep slope, with a known short length of cliff below! To make things worse, I was walking at the wrong angle of traverse, taking me into yet more bramble and missing the bilberry and a possible short-cut down off the rocky knoll. In the end it took me about 3/4 hour to get down and then, I had to follow the river-bed downstream to avoid the original blocked route.
Obviously, I`d given up hope of bilberry pugs by then and simply placed the trap elsewhere within the wooded cwm. The next morning, the only consolation in the mediocre catch was what I think is a satin beauty (see below).

Above: believed to be a satin beauty (note very broad antennae) - please confirm or correct.

My other two `mobile traps` were to be placed elsewhere in Stradey Woods - but one did n`t work, so the second trap was placed in the arboretum within the Stradey Estate, where the subsequent catch was very poor, though a rather pretty red-barred tortrix was caught (see below).

The home trap fared rather better, with a good variety of moths, but nothing new. I include a photo of a heart and club, a species that is frequent with me on the coast but much more local inland, though I`ve had it in numbers at one or two inland sites, such as the limestone area at Palycwrt on Mynydd Du.

Above: heart and club.

The next day, feeling very tired after the previous evening, after a poor night`s sleep and a very early start to check the traps, I went (with Nigel Stringer) to Caio Forest in north Carmarthenshire and, in contrast, a very pleasant day was had! I`ve hardly visited this area in the past, but it certainly has much moth (and wildlife) potential. About fifteen moth species were recorded, including northern spinach and small argent and sable, and there was much growth of goldenrod along the tracks - always a  good moth plant! No starwort caterpillars were seen though and we were perhaps too late for the attractive pyralid, small argent and sable, but a return visit, in season, would be worthwhile next year.
Many small (c 1") caterpillars of a light grey/mauve hue colour were seen on the leaves though, as well as leaf-mines. Any suggestions please? -see below. 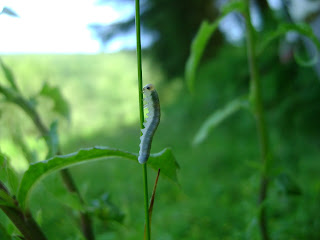 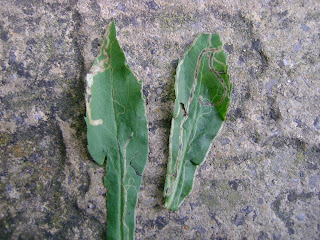 The habitat looks great for moth trapping, with mature conifers over thick bilberry swathes and flower-rich rides. One of the latter, below Allt Cwmgerwyn SN685415, was floristically attractive, with much ivy-leaved bellflower Wahlenbergia hederacea, heath speedwell Veronica officinalis and lots of heath milkwort Polygala serpyllifolia (perhaps small purple-barreds in season?). 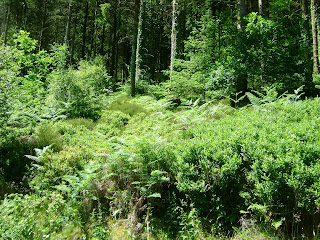 Above: Alltcwmgerwyn - note the thick bilberry. 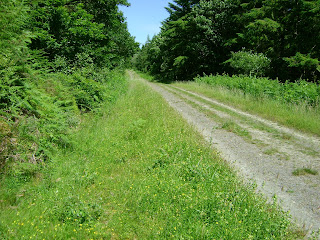 Finally, whilst tidying the garden yesterday, I noticed this scarlet tiger, lurking in my compost heap, and I took the photo below after it flew off into the neighbours` hedge.... but not as nice as Sam`s wood tiger!