I haven't given up!

I put a newly-acquired Skinner trap, 15W actinic version, under partial cover last night, which attracted a handful of common species including Scalloped Oak, Antler Moth, Sharp-angled Carpet and Pyrausta despicata.  Because it was a cold, wet night, my expectations were low so I'm not too disappointed with the small numbers.  I've also followed Sally's example and fitted a 20W compact actinic bulb to a porch light.  On the first occasion when it was left on overnight (last Thursday night) it attracted over 40 moths of 24 species: Dark-barred twin-spot Carpet, Ruby Tiger and Garden Pebble were FFYs.  Seems like a worthwhile investment, the 11W Energy-saving lamp that it replaced was not that effective!  I didn't switch this light on last night because the porch faces west and was exposed to the wind and rain.
Another small micro turned up in my wood shed at the weekend; I believe that it's the Cork Moth Nemapogon cloacella, which has turned up here once before (last May, in the conservatory). 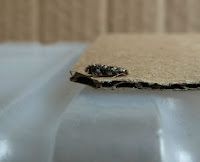 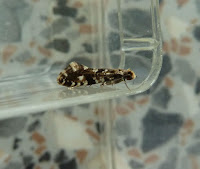 P.S. I've just discovered two photos from last week of a micro which might conceivably be identifiable.  Is it Mompha epilobiella? 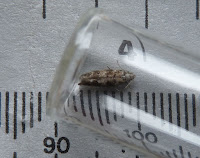