Median rare?  Sorry for the poorest pun on the blog so far, but a potentially very rare moth at Butterfly Conservation's Median Farm is too tempting to resist (even for a veggie).

I spent a productive half hour at lunchtime on Friday on the entrance track to Median Farm.  Every tap of a tree seemed to produce one or two micros, including several Paraswammerdamia lutarea, Argyresthia bonnetella and a Cydia janthinana (from Hawthorn), a couple of Mompha propinquella (photo), the Ditula lookalike Archips xylosteana (photo), my first few Carcina quercana of the year, and the uncommon Epinotia subocellana. 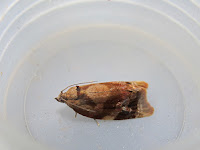 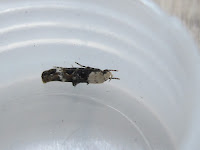 A wander into the marshy grassland revealed some large patches of Sneezewort (Achillea ptarmica) and I swept these in the hope of Dichrorampha species.  I have a history with Sneezewort Dichrorampha, as ca 15 years ago I regularly disturbed small, rather orange Dichrorampha from Sneezewort at Dingestow (VC35) but when I claimed these as D. sylvicolana I was told they couldn't be that because it's only found in S England.  The Sneezewort population at Dingestow has declined and I haven't caught the moth again.  To my great pleasure, one of my sweeps at Median Farm produced a Dichrorampha and, like the Dingestow ones, it had lots of orange scales in the apical area of the wing (poor photo below).  I hope it is going to prove to be D. sylvicolana new for Wales, but initial examination of the (female) genitalia were inconclusive because both my Tortricid books have the same genitalia illustration and no explanation of how they differ from other members of the genus.  I'll upload better microscope pics later. 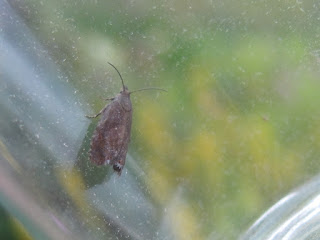