Weekly `jollies` have been reduced in frequency this year, due to a lack of time (there`s always a list of `to-do`s`) and inclement weather, but Nigel Stringer and I ventured up Cwm Clydach (SN74-19- etc) yesterday, primarily to botanise but also - of course - to simultaneously look out for daytime moths. In the event, the moths were rather poor, with records made of just five common species - Glyphipterix thrasonella (a few in wet, rushy flushes), a solitary 5-spot burnet, Bactra lancealana (1) and the `grass moths` Agriphila straminella (abundant) and a very few Crambus pascuella. I also was not `on form` and missed/lost three other micro species! 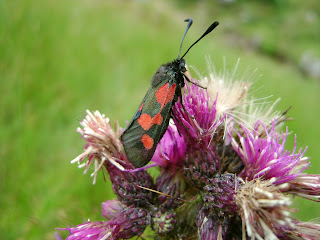 Above: the sole 5-spot burnet seen - compare it with the 6-spot in the previous (North Dock) blog.

Above: some small skippers were seen in the same area as the 5-spot burnet. This male (see black dash on wing) is on a white-flowered marsh thistle.

`Here endeth the moths` - don`t read on if not interested in plants! 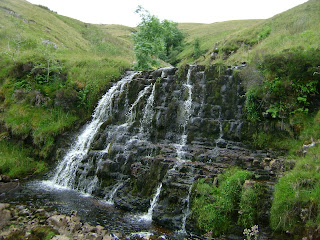 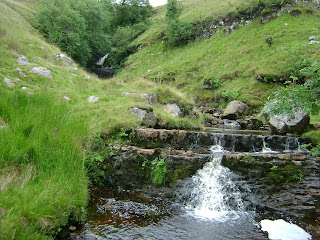 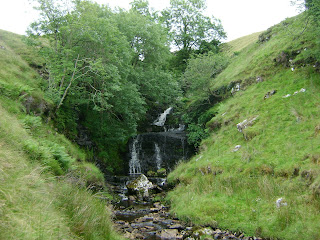 Above: just three of the many minor waterfalls you pass as an ascent of the `cwm` is made. The upper right-hand ledges of the last photo had one of the plants we were searching for - stone bramble, see below. 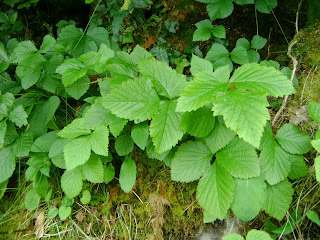 Above: rather unspectacular but distinctive - stone bramble Rubus saxatilis, a once `lost` Carmarthenshire plant that I refound here almost twenty-five years ago. It looks a bit like a giant strawberry with its stoloniferous `runners`. 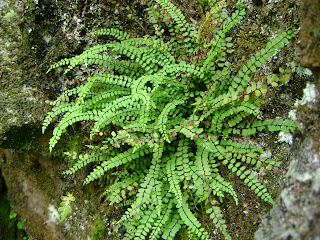 Above: maidenhair spleenwort - not the common urban wall type but rather the upland sub-species Asplenium trichomanes subsp. trichomanes, with the fronds growing away from, rather than being adpressed to, the rock surface. 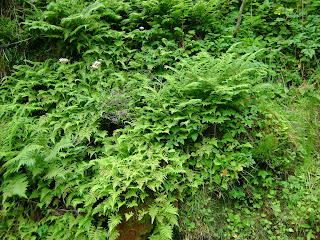 Above: the last plant photo (after all, this is a moth blog - sorry!) - beech fern Phegopteris connectilis. It grows usually in upland rocks or cwms - note the arrow-head `look` to the individual frond. Needless to say, the bryophyte community on these upland rock outcrops is also rich, but I know that Sam and/or Graham Motley would have surveyed this site in the past.

Above: the last, upper waterfall. I have fond memories of watching ring ouzels here in the early/mid 1980s, including a male singing from atop this very waterfall. I also caught, nearby, the scarce upland soldier beetle Ancistronycha (Cantharis) abdominalis, a large, handsome species with dark blue elytra. I`ve also had it (once only) further NE at Cwm Mihertach, in the Carms part of the BBNP. 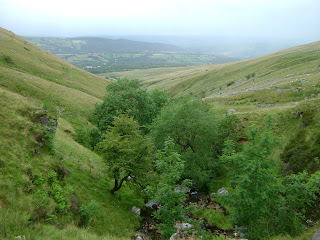 Above: looking back down the cwm. Of course, this is within the general territory of our resident `moth wizard`, Steve Clarke, and I had hoped to find something `good` in his patch - but I did n`t!
Posted by Ian Morgan