Following on from Sunday`s whistle-stop hour on a brownfield site at Machynys, Llanelli, yesterday (21/7) I had a similarly rushed visit to another site very close by - the old Morfa de-tinning works site, just NE of the Morfa roundabout on the A484. As strong acids were used to `de-tin` spoiled tinplate for re-use, the soils are fortunately heavily contaminated and this has deterred building due to reclamation costs. I say `fortunate` as the flora is rich and we are losing these urban equivalents of flower-rich pastures at a horrifying rate, so that towns are now going through that same ecological homogenization process that has already devastated the biodiversity of the countryside. Many other good brownfield sites have been lost, either to development or by irresponsible knee-jerk tree-planting, sanctioned (or overlooked) by those who should know better. Some of the moths seen are shown below. 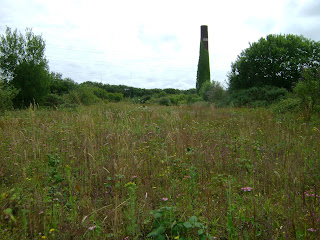 Above: general view of the site. 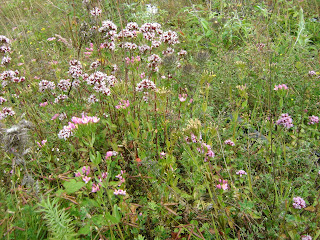 Above: a nice mix of marjoram, carline thistle and common centaury etc.

Above: Pyrausta aurata - associated with marjoram.

Above: another `dry ground` Pyrausta - P. despicata, associated with plantains.

Above: I noticed this caterpillar on scented mayweed Matricaria recutita - but it was n`t the chamomile shark that can be found on mayweeds - what is it please? (probably something common and polyphagous!).

Above: the lovely metallic and large Coleophora trifolii.

Above: it has n`t got the costal spot on the hindwing as in S. taeniolella, so perhaps it`s larseniella or cinctella?

Above: `Syncopacma Postscript` - following advice from Dave Slade, the underside view changes matters - it now looks like that  it is S. taeniolella.

Above: any comments re the i/d of this tort will be welcomed.
Posted by Ian Morgan