Two to watch out for in Carms

I'm back at Dingestow (Monmouthshire) for the weekend and took the opportunity to do some 'dusking' last night in the very flower-rich garden.  After an hour I spotted my main target: a Bordered Straw.  It was much less jittery than the Silver-Ys that I had been seeing beforehand and was very easy to net.  Prior to that I had caught 10 spp of Micro and 4 spp of Macro, including two firsts for Dingestow.  This is pretty remarkable as Dingestow has the longest moth list (362 Macro & 475 Micro) for any Welsh site following 15+ years of intensive recording in the 1990s/2000s.

Small Dusty Wave seems to be spreading north-westwards quite rapidly.  I have seen it previously in Oxfordshire and Sussex gardens but was very surprised to catch one at Dingestow, where I trapped and torch-netted regularly until 2007.  I am sure it is a recent colonist here. 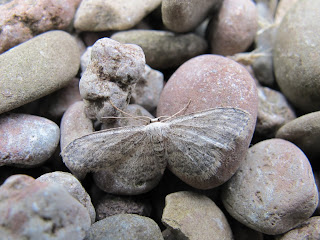 Argyresthia cupressella is an American species that arrived in Europe quite recently and, like the A. trifasciella that Ian had recently new for Carms, is spreading very quickly.  The surprising thing is that there are no likely host plants in the main garden at Dingestow, although there are some mature Cupressus 100m or so away, and I wonder whether this was a wanderer from nearby urban areas rather than a local resident.  Getting it to pose on this stone was a challenge! 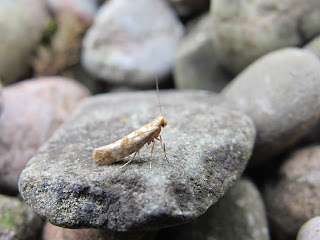 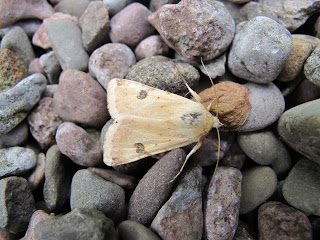