I put out four actinics last night: at an area of riverside fen & willows in the Millennium Coastal Park at Pwll; in Stradey Woods; a suburban garden on the western outskirts of Llanelli and Furnace Quarry. Moth numbers and variety were good, but nothing of special interest was caught, though some useful records were made. The latter includes barred red and Eudonia delunella at Stradey Woods, dingy shell and silky wainscot at the MCP, Pwll site and a shoulder-striped wainscot at Furnace Quarry. No migrants were caught, but tonight looks promising, with southerlies forecast - so, please try to trap.

Above: a well-marked silky wainscot, one of several caught.

Above: shoulder-striped wainscot at Furnace Quarry.

....and a couple of photos, showing two of the sites where the traps were left: riverside fen and white willows Salix alba, osiers Salix viminalis etc at Pwll and the Stradey Woods site. 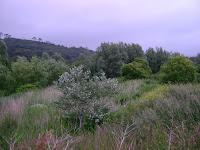 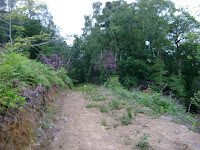