I put out a couple of traps in the garden last night (15/6) which attracted the usual quite broad array of mid-June moths but among them was a double line and another bordered straw (my second this year, a slightly more heavily speckled one to last week`s). 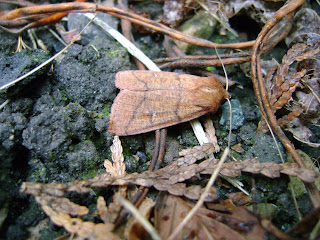 Above: double line. Carmarthenshire is a stronghold for this nationally scarce moth. 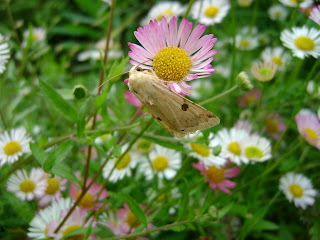 Above: the bordered straw on Mexican wall-daisy Erigeron karvinskianus - a native of Mexico that is much-naturalized around the Mediterranean and, increasingly, in the UK, Carmarthenshire included.

Postscript: just found the discarded wings of another bordered straw, probably bat-predated. My first individual is still `tucked-up` safely behind foliage, so the unfortunate one was a second bordered straw.

Other moth news: I forgot to mention that I had a forester last week at Mynydd Llangyndeyrn (the high ridge between the Gwendraeth Fawr and Fach valleys), seen in exactly the same spot as last year`s individual. It was seen (and quickly photographed) in a grassy area, with much sorrel, in the central limestone block of the ridge, and not on the acidic Millstone Grit/quartzite areas.
Paul Sperinck saw a hummingbird hawk-moth last Saturday (13/6) in his garden at Felinfoel, Llanelli.
Posted by Ian Morgan