The weather forecast for trapping was perfect on Thursday night (11/6), with warm, humid and overcast conditions and thundery rain coming from the south. I placed out three traps at home (Tyrwaun, Pwll): an MV, a 40w actinic on the flat roof, and a small battery-powered actinic among trees at the bottom of the garden. None of the traps were directly inter-visible.  I subsequently wished that I had n`t been so lazy and had set up additional traps, in other habitats away from home, as the results from the home traps were so good - 75+ spp (with some micros still to do). There was background knowledge too, from perusal of other areas` moth blogs and the migrant-dedicated site `Atropos Flight Arrivals` that migration was afoot, with many sightings of bordered straws and even some striped hawk-moths.
The weather conditions were also ideal to ensure a good showing of resident species and interesting records included a figure of 80, sand dart, common wainscot (not particularly common!), Freyer`s pug and repeat showings of two `Tyrwaun specialities` - the elm-feeding pyralid Rhodophaea formosa and the lime hawk-moth and, hot-on-the-heels of my recent capture, a Argyresthia cupresella (the small actinic placed near next-door`s tall cypress did the tricks!). This latter micro is really spreading at present (eg recorded at Aberystwyth recently - though Llanelli is further west than Aber! Check the line of longitude on the map).
With the migrants, rusty-dot pearls dominated, with 12 of this pyralid and there were also two small mottled willows and singles of rush veneer and silver y. As I checked the traps, I regretted that there were no bordered straws present and it was not until later, when I took the traps down to various parts of the garden to `shake out` the moths from the egg cartons into thick vegetation (and relative safety from predation), that a surprise was in wait. In fact - and absolutely truthfully - it was at the very end, when I was removing moths from the actinic box itself that, when dislodging a heart and dart hiding in a slight recess that I disturbed a bordered sallow. Unfortunately, I had no container to hand, the bordered straw was vibrating its wings ready to take off, and I was some distance down the garden and I thought that nobody would believe me without photographic proof! I obviously (from the photo below) made it to the house and the moth was quickly placed into the fridge to cool down - phew! 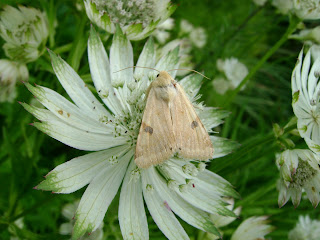 Above: the bordered straw, released later onto an Astrantia flower, where it fed for a while. 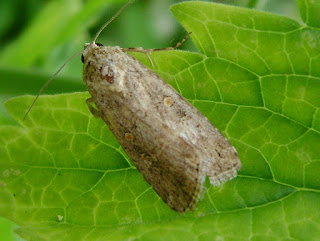 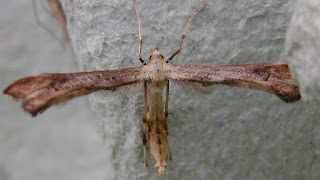 Above: believed to be a hoary plume Platyptilia isodactylus, a species that feeds on marsh ragwort.

Above: Freyer`s pug, a whopper of a pug (almost an inch across). I had fantasies at first of this possibly being a bleached pug. Thanks to Jon Baker and George Tordoff for i/d help. Another cypress-associated moth. 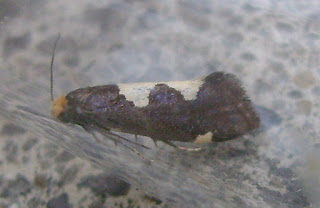 Above: the micro Incurvaria oehlmanniella - I`ve had a couple of records of this recently.