I had a very good night last night but not as good as previous posters. 43 species and 110 moths (mainly listed as common, non I haven't caught before but quite a few ffy).  I  used my usual moth trap and also left the porch light (fitted with actinic bulb this week).  I emptied the trap and checked the porch at just after 3am. Most moths, as usual, were in the areas around the trap. Only immigrant was Silver Y  (2).

I would appreciate help with identifying the eggs which were on one of the egg boxes (assume moth eggs but beetles also in trap). Could they be Fox Moth eggs? There was a very tatty female in the box.   There was also what looked like a crushed Pebble Prominent but when I lifted it out out it separated into two perfect moths - so I assume I had disturbed them mating? 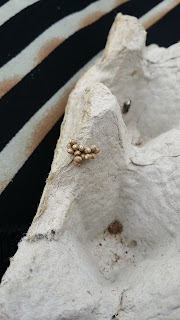