I have been trying to find a Bordered Straw like everyone else, and trap after trap of good moths but no Bordered Straw.  Two nights ago I tried to net a whitish moth on Valerian as suggested by Barry in a previous blog.  I don't recommend jumping around at dusk on a patch of Valerian in a bungalow estate of older persons.  I must have looked a sight when visitors came to one of the bungalows and then let out a yappy jackrussel to snap at my heels.  Not wanting to be carted away I gave up, oh well I thought onward and all that......
I was disappointed not to have caught one as I live on the coast.

Last night I trapped at a friend's small holding in Llangain and they live overlooking the river, so with hope I went through the trap this morning and I couldn't believe my luck when I found one at last.  I did a jig out of excitement, no skill on my part though in catching it.
I have read the debate about whether it is skill or luck in catching these moths or any moth for that matter, I know one thing, if you don't trap, you won't catch anything.  I owe a big thank you to my friends for letting me trap at theirs and making me great bacon & sausage sarnies and gallons of tea. 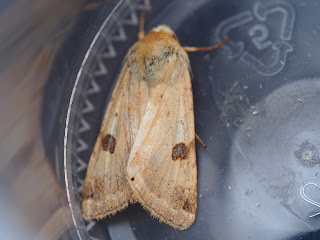