Instead of cutting the hedge....

I`d set myself the task of cutting the hedge this afternoon but instead I went out looking for micro-moths. I hope to cut this hedge tomorrow afternoon unless....!
Anyway, I visited two sites, the first being some wet `rhosydd` with much scrub at Cencoed-uchaf near Llanelli, but it was disappointing - just common micros such as Glyphipterix thrasonella (pretty though they are!) and Micropterix calthella in the wet areas and Cydia ulicitana all over the gorse.
Thinking that I`d try something different, I went home to park the car and walked into the Millennium Coastal Park (MCP) that abuts my home, safe in the knowledge that at least there was an array of dry, flower-rich grassland, wetland and scrub etc, all potentially good for lepidoptera. 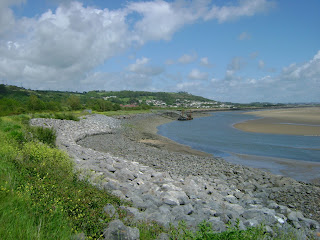 Above: a seaward view of the MCP, from the eastern end of Cefn Padrig shingle ridge (the unmodified section is to the right, out of the photo). Pwll village is  on the hillside in the distance.

The wind was quite gusty but, in more sheltered parts, common blues were out in force, together with a few large skippers, small heaths and a single male brimstone. Pyrausta purpuralis was seen and a burnet companion was spotted, stalked and photographed. 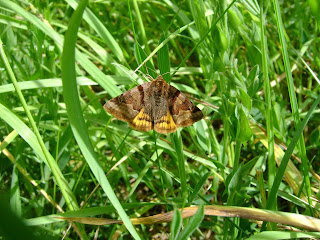 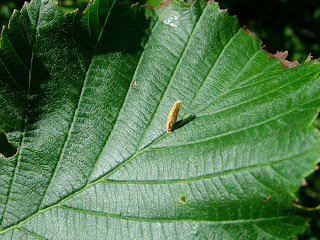 Also, some terminal leaves of grey poplar were folded, as in the photo below. A couple that were opened revealed frass but nothing else...any suggestions? 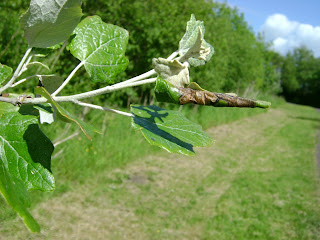 Plenty of other scarce or local invertebrates (in a Carmarthenshire context) were seen and I offer just two below: 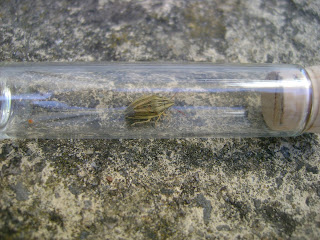 Above: `bishop`s mitre` Aelia acuminata, a type of hemipteran. 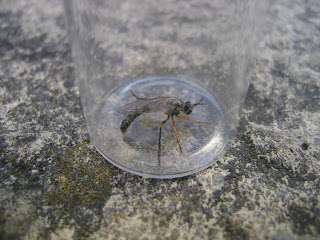 Above: the robberfly Dioctria rufipes (a female).
Posted by Ian Morgan