Tuesday evening was cloudy and fairly mild here early on, so I put two actinic traps out, whereupon the skies promptly cleared and the temperature dropped, so predictably the said traps were fairly empty of moths yesterday morning.  To be precise, I caught a single moth, a Heart & Dart.  However, on one of the egg boxes I saw a clutch of small, grey-coloured eggs: 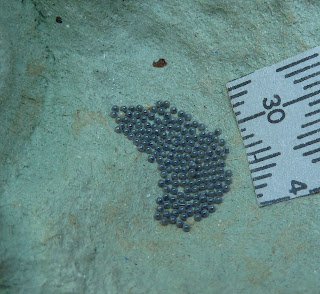 Naturally, I assumed that these eggs had been laid by the solitary H&D moth and was intending to establish the favourite food plant on which to place them, but this morning on inspecting the eggs I discovered that they had hatched out: 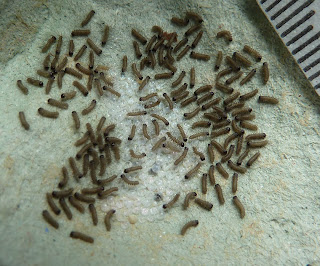 Clearly they had been on this egg box for some time and I had failed to notice them (it's happened before!)  Looking back on the catches from this trap over the past month, and given that the larvae are hairy, it seems most likely that they are from one of the Ermines, either White or Buff.  This means that I have the choice of  'a wide range of herbaceous plants' on which to relocate them.

This is about as exciting as it's got moth-wise over the last couple of weeks, although I have seen numerous Micropterix aruncella feeding on Hawthorn blossom.  Sadly, daily inspection of the Germander Speedwell blossom in the garden for Cauchas fibulella, which I saw this time last year, has so far been unproductive.

One other sighting of note has been this rather drab brown micro with few distinctive features other than the forward-pointing antennae: 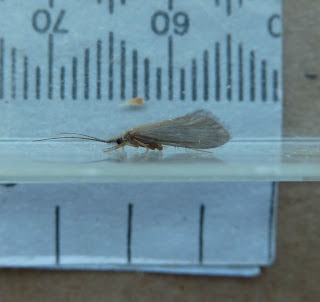 Does anyone recognise it?

P.S. The moth is not quite as big as it looks from the scale, which is 5mm+ below it.  The forewing length was 6-7mm.
Posted by Chris Handoll