Catching up with the moth blog: part 1.

Fatigue (after last Thursday night`s  (4/6) trapping efforts) and just `too much to do` has delayed my reporting of recent finds and captures. This first blog relates to some `daytime mothing` - carefully searching, sweeping and beating, primarily for micro-moths, at three localities near Llanelli, last Thursday afternoon.
Stradey Woods (NW of Llanelli) - here the best find were adults of Bucculatrix thoracella, beaten off the dense epicormic growths on hybrid limes. They are really tiny, and reminiscent of juvenile homopterans - they half float/half fly when disturbed. I`d already had this micro as leaf-mines last September 2014 (conf. SDSB) on some urban limes at Penallt, Llanelli, but it was nice to see the adult - see the photo below (with most of these photos, please click on them to enlarge). Try sweeping your local limes now! 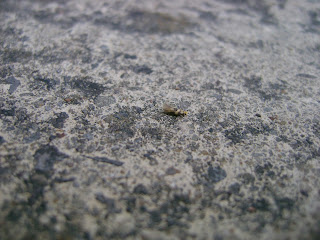 Afterwards, I visited an area of flood alleviation woodland at the edge of an out-of-town commercial/office development near Gors, Dafen. Among various lepidoptera, found in quite rich wet grassland, the tiny (again!) Glyphipterix forsterella was a pleasing, new moth for me. Note the silvery dot in the black apical (`tail-end`) spot. It was found over an area of sedges. Sweeping also yielded two caterpillars - one of which had me `stumped` until I chanced upon a photo in Sterling & Parsons (see page 174) - it was the strikingly-marked larva of Helcystogramma rufescens. I also found the attractive caterpillar of a Timothy tortrix Aphelia paleana, both instances where the caterpillars are more colourful than the adults. 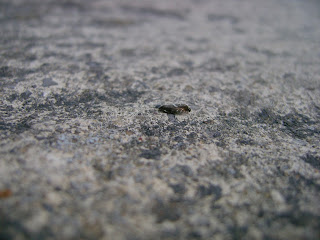 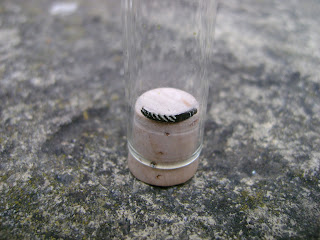 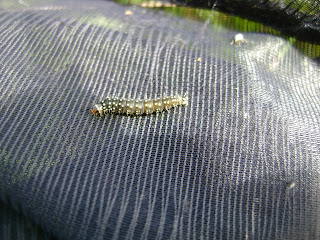 
The third locality visited was the small area of dunes and saltmarsh at the North Dock, Llanelli, where the `star find` was a shaded pug, a very local species that was first recorded at Pembrey Burrows by Barry Stewart back in 1995, with subsequent sightings there and in Pembrey Forest by Jon Baker; it has also been recorded at Pwll. Jon also kindly confirmed the det. for me. 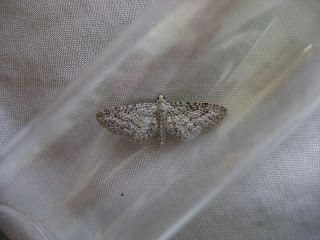 Above: `Pugs are not always pug`: the attractive shaded pug.
Posted by Ian Morgan