Brownfield Moths and some other invertebrates

I had two outings in the last week to brownfield sites near Llanelli, visiting Machynys last Wednesday (27/5) and again on Saturday (30/5), with a locality at Bynea being also visited on the latter date. As we all know, so-called `brownfield` sites are `Cinderella` habitats that sometimes hold habitat mixes of great ecological quality, with swathes of flowers and a backdrop of mixed scrub, all on dry soils with ample sunshine.
My first visit to coastal Machynys on Wednesday was hampered by strong winds that made sweeping difficult and which drove moths and other creatures to shelter in thicker vegetation. However, sheltered areas held common blues and the season`s first small heaths. I also caught a couple of tortricids Bactrea lancealana and Cydia nigricana as well as the little, all-white Elasticha aregentella. The tiny Glyphipterix simpliciella was also seen. I`m having much enjoyment searching (sweeping, beating or just carefully looking) for micro-moths at present, though I`m still very much a novice - and making mistakes, but that`s how you learn. Thankfully, George has been very helpful and I`m very grateful to him, and others, for their help. We`ll get there....eventually! (I`m actually `stuck` on another tort at present!).
Of course, whilst carefully searching for micro-moths you spot other invertebrates - sometimes common species but also others that are more localised or specialised, all adding to the interest.
The visit on Saturday (in calmer conditions) yielded more moths and butterflies, with several dingy skippers and FFY large skipper and several tortricids, with a Cetti`s warbler belting its song from nearby wet scrub 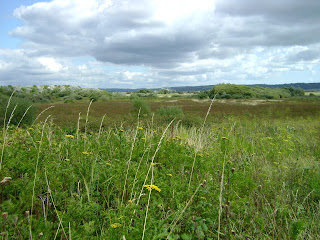 Above: a general `habitat shot` of the site (taken in Aug last year). 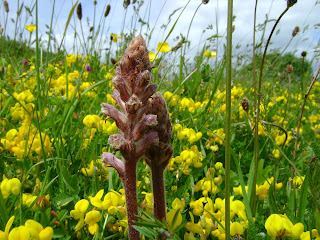 Above: the uncommon parasitic broomrape within bird`s-foot trefoil at Machynys. 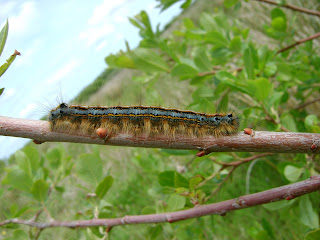 Above: lackey moth on willow. 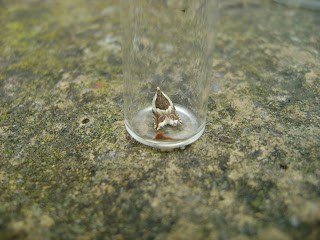 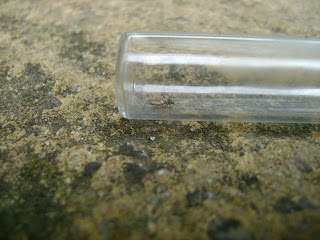 Above: the tiny Glyphipterix simpliciella (click on pic to enlarge). 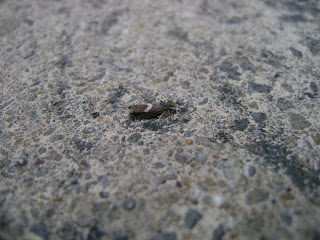 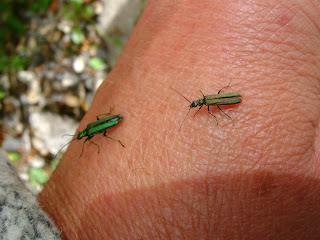 Above: I think it was Maggie who asked about the identity of the thick-kneed flower beetle Oedemera nobilis (seen on the left, a female without the thick knees). Here it is accompanied by the smaller and bronzy O. lurida (which I sometimes get in my moth traps). 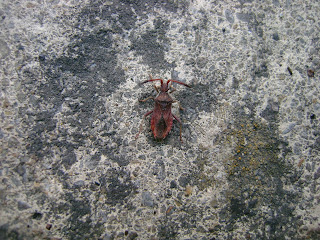 Above: the scarce `denticulate leather-bug Corimerus denticulatus, a species of dry habitats. Note hairy edge of the scutellum (click to enlarge). 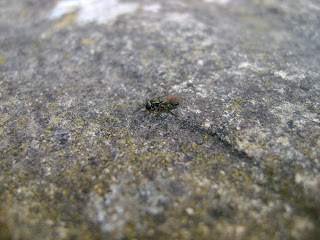 Above: one of several hoverflies seen - the small ground-hugging Eumerus sp. (not identifiable to species from the photo as it was released). Another small dark species of dry ground, Paragus haemorrhous, was also caught.

After visiting Machynys on Saturday, I re-visited an old industrial site behind the former Dyfed Steels Works at Bynea and, again, recorded several moth species. Of particular note was Argyresthia trifasciata, new to Carmarthenshire, beaten from a Monterey Cypress on the first `hit`! However, further beating on several cypresses yielded no more, so a lucky shot! 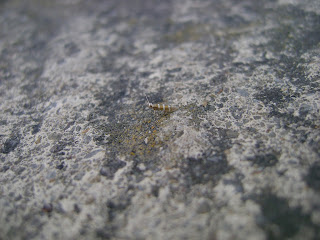 Above: trifasciata - you really have to `click on the pic` for this one! Don`t worry, I have now ordered a new camera with adequate macro options. It has also been recorded in Mons. and Glam. in recent days. For a far better photo, see the recent one posted by Paul Parsons on the Glamorgan blog. 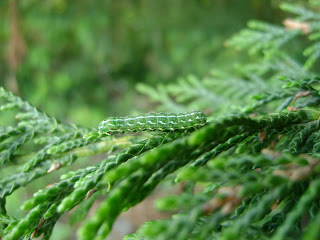 Above: also seen on the same cypress was this Blair`s shoulder-knot caterpillar. 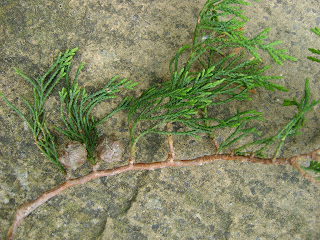 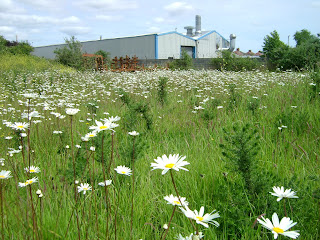 Above: again showing the value of brownfield sites - ox-eye daisies galore. I should have looked for Bucculatrix nigrocomella here (see Sam`s blog). I`m sure that expert moth`ers like Sam, George or Barry could `milk` such brownfield sites for good moth records.
Posted by Ian Morgan