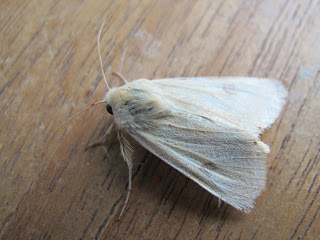 A half hour of torch-netting in our haymeadow last night produced a very pale, rather worn Bordered Straw (nb the little black dot at the hind corner of each wing as well as the 'kidney mark') along with 2 Silver-Y and another 10 common species.  The following is a running total, as far as I know, of Bordered Straws in Carmarthenshire, with this year's records following on from those in 2006:


There is slight ambiguity over one date: Ian's said he trapped "last night (15th)" when blogging on 15th June.