I could n`t find my notebook from last night`s trapping, so I walked to the trap site where I had last saw it at about 5.30 am this morning, a location to the east of Pwll Fishing Lake, Pwll. It`s not a fishing lake anymore - it was just another of the local authority`s crack-pot ideas, excavating a freshwater coarse fishing lake on a saltmarsh area.
En route, I saw two scarlet tigers, resplendent in their aposematic glory, and the year`s first meadow browns. Mullein plants were noted and several were being consumed by their namesake moths, or rather, their caterpillars.
I could n`t find my notebook, cursed a few times and resigned myself to its loss. When I returned home, it was next to my computer - where I`d put it! That`s what two mornings up with (or before) the birds does to your brain. I`ll be trapping tonight though - the warm nights and southerlies are suggestive of something interesting. 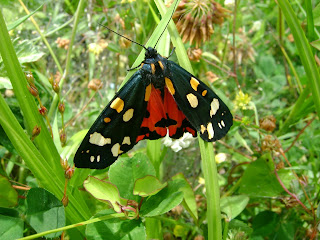 Above: the two individuals seen - note the subtle differences in wing markings.