A day in the hills

Last Tuesday (9/6), Nigel Stringer and I visited Allt y Gwydre, a `cwm` with a nice mix of habitats, located to the south-west of the Usk Reservoir. Nigel had been warned by his wife  - who, GCHQ -style, now monitors the Carmarthenshire moth blog to ensure that he avoids precipitous climbs and to generally check on his activities, so a rather gentle excursion was planned. 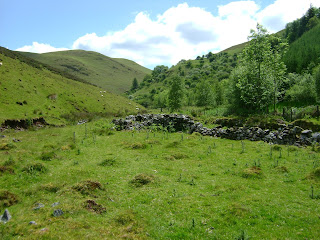 A tortricid that was caught is believed to be Epinotia tetraquetrana (photo below, det. George Tordoff), a species that is stated to be `common` in the national guides, but regarded as a scarce moth in neighbouring Glamorgan*, with just four records; it would be a new moth for Carmarthenshire. A specimen has been retained.
* see the highly recommended Moths of Glamorgan (2014) - and get yourself a copy! 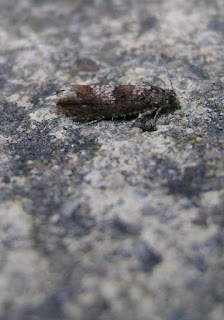 A few other records, of common micro and macro-moths were made and we did some general botanising, including the inspection of rock outcrops on a steep hillside - `I can`t resist a good slope`, as my companion with his simian tendencies remarked. Of course, such steep areas are where grazing pressures by sheep are less or absent and where interesting plants and moths may be found, hence the real reason for their inspection. Looking around from the higher hill top, it was depressing to see many steep cwm-edge fields now agriculturally improved, fields that only twenty-five years ago would have supported a rich flora and holding moths such as the chimney sweeper and the small argent and sable.
One pleasing find was the robberfly Machimus atricapillus, devouring an unfortunate Rhagio scolapaceus (photo below). Machimus is probably the most frequently encountered (in relative terms) large asilid found in upland Carmarthenshire. As with the chimney sweeper and the moth assemblage of flower-rich  upland pastures, the smaller Leptarthrus brevirostris would have once also been quite frequent before the biodiversity of those pastures were destroyed by intensification. 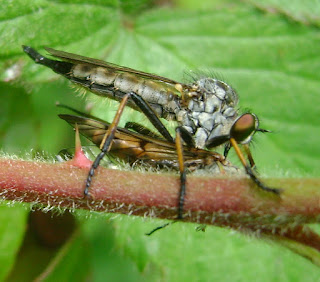