I do most of my mine recording in autumn, focussed on Stigmella and Phyllonorycter, and haven't really bothered with spring Eriocrania mines on birch before.  This is a difficult genus to identify as adults, but the larvae each have distinctive characters so identifying tenanted mines is reasonably accurate.  So far I had seen three species this year: unimaculella (new for Carms) at Cnwc y Llwyn, sangii (dark grey larvae) in the Eastern Cleddau Valley, and semipurpurella at Mynydd Mawr.  Yesterday I looked at the E unimaculella colony in our wood, where the mines are large and the larvae have left, and noticed several much smaller mines which are still tenanted.  These have a long section of linear frass at the start and pale-headed larvae, which couples with their rather late season to indicate E salopiella. 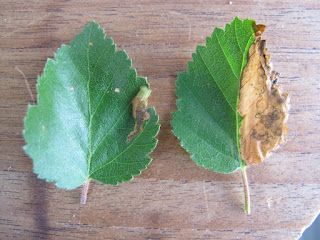 A couple of days ago George emailed me a photo of the mines of Incurvaria pectinea in a Hazel leaf from Monmouthshire.  I had this species in the back of my mind as we walked up along the edge of our field, with Bea hiding among the hazels of the grown-out boundary hedge and trying to jump out at me.  To my surprise I noticed one Hazel leaf with 5 roundish, tenanted mines on it.  They do appear to be early instar I. pectinea larvae rather than any species of beetle/sawfly illustrated on the Leafmines website.  If so, this is a new moth for Carmarthenshire. 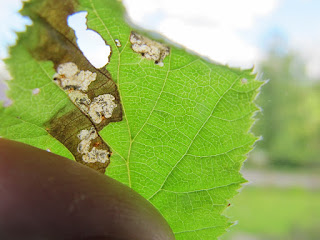