Sinead Lynch of the Bumblebee Conservation Trust wanted to see the upland bumblebee Bombus monticola, a species that she had not seen. As I had recorded it at the old lead mine site at Nant y Bai last summer and because the site had good access, a recording `jolly` was arranged, with about ten attendees. Among the latter was an old friend, Mark Pavett of Cardiff Museum, who I had n`t seen for about twenty years. Mark specialises in the aculeate hymenoptera but also has a broad knowledge of other invertebrate groups such as the diptera and coleoptera. Also present was Vaughn Matthews of our Carmarthenshire Moth Group. The weather was kind (though the most persistent sunshine appeared as we were leaving in mid afternoon!), and we had a good time making useful records of all sorts of wildlife.
The moth highlight for me was spotting a glaucous shears resting on a heathy slope, a nicely marked and well-coloured individual. The only other moths that I noted were the common Cydia ulicetana on gorse and several drinker caterpillars; a few species of butterflies were spotted, including a fair number of green hairstreaks (which particularly pleased Vaughn - a new `tick` for him!). Co-incidentally, my first green hairstreak (if my memory serves me correctly) was on the hillside opposite, overlooking the Tywi - but back in 1973. Time flies!
Other (non-moth) highlights for me today included the hoverfly Sphegina sibirica, a species that I had not seen before*, and an `old friend`, the little jumping spider Evarcha falcata.

* associated with Picea (as was mine)...re the technical determination of this species: the underside of the base of the abdomen was checked and was entirely membraneous with no plate. It is a species that was n`t recorded in the UK until the early 1990s, but has recently been seen in neighbouring Brecs...something for Sam to look out for in the Brechfa Forest area. 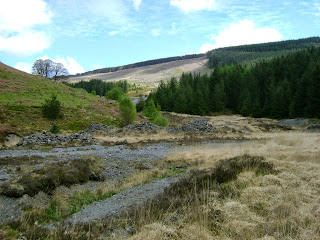 Above: a general view looking into the site. 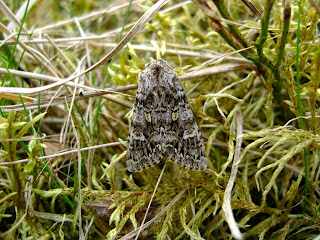 Above: the glaucous shears. 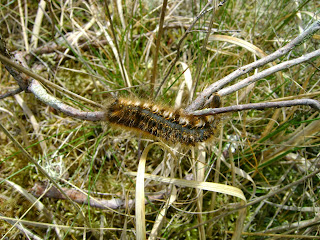 Above: a drinker caterpillar - many, of different sizes, were seen. 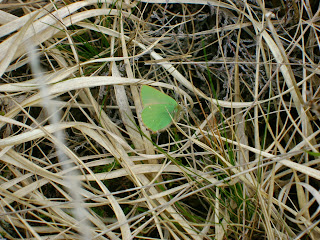 Above: one of the many green hairstreaks seen.
Posted by Ian Morgan